Did you know that lowfat chocolate milk is the official drink of Halloween?  This fun fact is something I learned a couple of days ago when my kids and I were invited to Paramount Studios in Hollywood by “Got Milk” to kick off the Halloween season and meet the new Milk Mustache celebrity mom.  It was a really fun event with Quick the Rabbit, lots of chocolate milk and trick-or-treating on New York Street.  New York Street is the “fake” city street that is a permanent set on the Paramount Lot.  Songs are written about it never raining in Southern California.  How ironic that it was actually raining, although sporadically.  It hadn’t rained since last April.  So my hair looks really bad and/or was covered by a baseball cap.  The rain did not dampen our fun one bit and the good folks from “Got Milk” even provided us with chocolate milk colored umbrellas!  It was fun to run into some of my blogging buddies, including Tara and Liz.

Angie Harmon was unveiled as the new “Got Milk” mustache mom.  Angie was at the event along with her husband Jason Sehorn and their three daughters.  I got to meet and speak with both Angie and Jason.  We compared some notes about having little kids and being Republicans in Hollywood.  Yep, uh-huh, just me and the

famous actress and NFL player kicking back, sipping chocolate milk as our kids played in the bales of hay at a movie studio.  Just an ordinary day for a Hollywood Mom like me…

Angie’s ad debuted in People magazine this week.  It’s a beautiful picture of her with her three girls.  Thanks to the wonders of technology, you too can make your own Halloween-themed milk

mustache digital card using the “Make Your Own Milk Mustache Ad” tool online at WhyMilk.com.  I learned quite a bit about lowfat chocolate milk: it is a major source of calcium and provides other important bone-building nutrients including vitamin D, protein, potassium and phosphorus.  Each 8-ounce serving provides 300 milligrams of calcium—or 30% of the Daily Value for this vital bone building nutrient.  Research suggests that kids who avoid milk are more likely to suffer bone fractures, have

lower bone mass and may even be shorter than their milk-drinking peers.  Well, if that doesn’t get you running to the fridge?!

Throughout October, the Chocolate Milk: The Official Drink of Halloween team will host free Halloween events at local children’s museums in 25 cities across the US.  Check out the tour schedule below.  Definitely visit WhyMilk.com for more healthy Halloween tips, to find festive recipes—such as Goblin Good Rice Pudding and Minty Witch’s Brew (which I sampled at the party and loved!).  There is so much info on the WhyMilk.com site, including tips, contests and other fun stuff that I bookmarked it under my “mom stuff” tab.  Yummy chocolate milk and Halloween go great together!

In the past week, I’ve been to The Disneyland Resort twice to check out the Halloween Time scene.  Last Tuesday, I was at Disneyland with a couple of friends and our kids (6 toddlers and 1 newborn).  Then this past Friday I was at Disney’s California Adventure for Mickey’s Trick or Treat Party.  This year, Disneyland is featuring Space Mountain Ghost Galaxy for the first time.  Ghosts appear out of the starry darkness and swirling galaxies of Space Mountain, reaching out as if to grab guests as they speed through space. The exhilarating drops and curves of the journey are punctuated by piercing screams, creepy sound effects and haunting music.  I did not get the chance to take a ride on it but I have a friend who went on it with her two tween daughters.  She said they all loved it but it was a bit scary.  One of my favorite attractions is The Haunted Mansion.  Unfortunately, I didn’t get to go on this one either!  Team Toddler nixed it.  Oh, well, maybe one day I can shake the kids and go by myself!  Transformed to a mix of Halloween spookiness and Christmas tradition, Haunted Mansion Holiday is inspired by the classic animated film “Tim Burton’s Nightmare Before Christmas.” Jack Skellington and his friends provide plenty of havoc and surprises as they celebrate the 40th anniversary of the Haunted Mansion in their unusual style.  Jack’s return to the Haunted Mansion includes the traditional Halloween/Christmas gingerbread house in the Mansion Ballroom, with some special spooky surprises in this year’s design.
My favorite area of the park is the Big Thunder Ranch.  I can’t totally explain why, but I just think it’s so fun and a peaceful vibe.  During Halloween Time, visitors will

sometimes find the ranch animals dressed in costume for a seasonal Halloween Roundup, with pumpkin carvers, Halloween décor and activities for youngsters, all presided over by Sheriff Woody.  Next door at Big Thunder Barbecue (my favorite restaurant in Disneyland), Miss Chris and the Roundup musicians add Halloween songs to their repertoire.  I love fireworks!  Luckily, I was able to catch “Halloween Screams – A Villainous Surprise in the Skies,” a fireworks spectacular that haunts the nighttime sky of Disneyland throughout the Halloween season.  To start the show, “Master of Scare-omonies” Jack Skellington appears in a flash of fire above Sleeping Beauty Castle.  I really enjoyed the show as did Team Toddler.  There were several, “how’d they do that?” moments.  It’s more than just a fireworks display.
This past Friday, Chip and I were invited to attend Mickey’s Trick or Treat Party at Disney’s California Adventure.  Our neighbors heard we were going and wanted to join us, so eight of us: 3 parents, 3 toddlers, 1 13 yr old and 1 20 yr old all set off for Anaheim.  Mickey’s Trick or Treat Party is a separate admission event held at Disney’s California Adventure for 12 nights in October (2, 8, 9, 15, 16, 21, 22, 23, 28, 29, 30 and 31).  This party lets adults and children alike dress up and trick-or-treat in the ultimate Disney neighborhood.  The event starts at 7:30pm on Fridays (6:30 pm other nights) and goes for four hours.  We arrived around 8:00pm due to Friday traffic.  So, although the party is described as being for younger kids, I wouldn’t recommend it for the under 8 year old crowd.  Chip is 3 and our neighbor twins are 4.  It was a late night for them and with only about 3.5 hours do do things like meet characters in special Halloween Costumes, participate in some Halloween activities, see the Character Cavalcade, Trick or Treat and go on 2 rides, we just couldn’t do very much and the kids were tired and overwhelmed.  I did see lots of tweens having a blast.  There are two party areas, Candy Corn Acres and Hollywood “Bat-Lot” Bash where tweens and teens were dancing around and having a really great time.  The 13 yr old and 20 yr old in our group went off together and had an awesome time.  It was the perfect event for them.  So my recommendation is to take your younger kids during the day to Disneyland or Disney’s California Adventure.  There is still plenty of Halloween feeling in the decorations and you will be able to pace yourself and maybe just wrap things up after the fireworks.  For more information about Halloween Time at Disneyland Resort, see www.disneyland.com/halloween. This site will be updated as frightfully fun details become available.
Value-minded vacationers can celebrate Halloween Time with a special travel offer this fall: savings of $400* at the Disneyland Resort. From Aug. 12 through Dec. 19, 2009, guests will save $400 when they book a 4-Day/4-Night Disneyland Resort vacation package, featuring Disneyland Resort hotel accommodations – Disney’s Grand Californian Hotel & Spa, Disneyland Hotel and Disney’s Paradise Pier – and park hopper tickets. The offer is valid for arrivals through Dec. 20, 2009, with a final booking day of Dec. 19. Details are at www.disneyland.com/Save400 .
I’m planning to be back at The Disneyland Resort at least two more times before Halloween Time (September 25-November 1) is over.  It really is a great time of year to go!

For some great reviews and info about Disneyland, visit Uptake.com
Posted by Elizabeth at 10:13 PM 3 comments:

We have a winner.....#4!  Beth from CA!  Thanks for reading and entering.  Please check back as we will have some really neat giveaways for the remainder of the year.

Over the course of my lifetime I have: skateboarded, inline skated and snowboarded.  Surfer Guy does all that as well as, y’know, surf.  So when I was offered the opportunity to review a Shred Sled, I was all over it.  I tried it, yes…Yes, I did.  I tried it and if I didn’t have two babies and a to-do list about a mile long, I may have mastered it.  However, I pride myself in doing things efficiently.  So, I grabbed the Shred Sled and walked across the street to Seth’s house.  Seth is 13 and a wicked good skateboarder.  He also doesn’t have to worry about breaking something and then having to fly his mother out to take care of his two toddlers while he is laid-up.  Seth graciously offered to be my Shred Sled Tester stand-in.  So off he went….Whipping down the street.  Then, I was totally thrown off by what happened next: He skated back up the hill towards me without having to take his feet off the board to “push off”.  This is the beauty of the Shred Sled, you use your arms, hips and whatever else, to create the motion that propels you!
So, you ask: What is a Shred Sled?  It’s the next generation caster board and first 4-wheel inline, dual-deck board.  Instead of pushing off the board like a

regular skateboard, riders use their hips, legs and arms to move The Shred Sled, similar to movements used to propel surfboards and snowboards.  It really combines skateboarding, surfing and snowboarding into one unique sport.   The Shred Sled is great for strengthening kids' legs and waist muscles and encourages them to get off the couch and get active outdoors.  The Shred Sled is appropriate for kids ages 8 and up.
So back to my stand in tester.  Seth’s feedback is that it is cool, fun to whip around in circles and generally cool for carving.  Carving is a snowboarding term where you use the edges of the board to “carve” down the hill.  However, he said he wouldn’t give up his skateboard for a Shred Sled.  In my opinion, it’s a fun variation on all the board sports.  You can jump out your front door and just go for it.  No need to find snow or waves.  Speaking of waves, Surfer Guy went surfing on his way home from the office today.  When he got home, he took one look at the Shred Sled and told me not to wait up for him.  He’s been out there for about 45 minutes now ripping it up in the ‘hood.
Check out the video to see the Shred Sled in action.  Then keep reading to win! 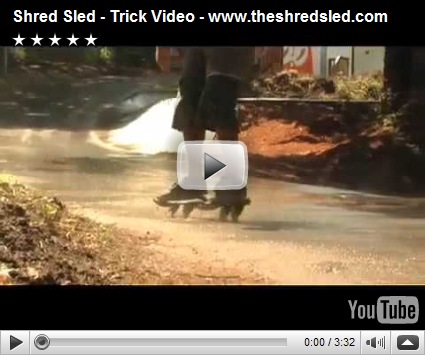 The good shredders at Shred Sled have offered to give one of my readers a Shred Sled!  So here is how you enter: With a price of $119.99, The Shred Sled is a blast and something your family will be able to use for years. Here is how you enter: Contest period runs from Thursday, October 1, 2009 at midnight (Pacific) until Thursday, October 8, 2009 at midnight (Pacific). Enter by leaving a comment, any comment and leave your e-mail address. If you don't leave your e-mail address, I cannot contact you if you win and your entry will be disqualified. One entry per person. Winner must provide a US mailing address. At the end of the contest period, I will utilize Random.org to randomly choose a winner. Winner will be contacted by e-mail the business day following the end of the contest period. Winner has 72 hours to respond to my e-mail. If winner does not respond within 72 hours, The Shred Sled will go to the second place winner as decided by Random.org. Good luck!
Posted by Elizabeth at 11:53 PM 23 comments: