Every Southern California theme park has Halloween activities. However, not all events are the right fit for each member of the family. Here is a guide to the top picks to help you plan your Halloween family fun. 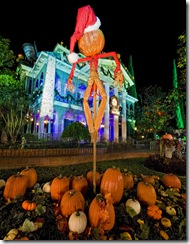 Disneyland is all dressed up for Halloween! Space Mountain has turned into “Space Mountain – Ghost Galaxy” and The Haunted Mansion is all decked out a la “Tim Burton’s Nightmare before Christmas”. Disney characters are dressed in Halloween costumes and the Disney Villains characters can also be found roaming the park this time of year. 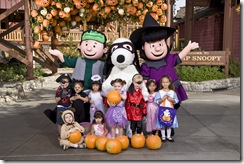 Knott’s Berry Farm is transformed for the season into The Halloween Haunt at Knott’s Scary Farm Wednesday through Sunday nights in October. Featuring 13 mazes, 7 hair-raising shows, 3 horrific scare zones and 1,000 roaming monsters, this year is scarier than ever. The doors open at 7pm and close at 1am (2am on Fridays and Saturdays) for this separate ticket event. Knott’s Pre-Scare “Boo-ffet” Dinner, $20.99, allows event ticket holders early entry into The Haunt. Knott’s Halloween Haunt is a scary event and not recommended for children under 13. Guests are not allowed to wear costumes so as not to be confused with The Haunt characters. Tickets start at $33. For more information visit: Knotts Scary Farm

For the younger kids, Snoopy’s Costume Party in Camp Snoopy is an alternative daytime non-scare celebration of Halloween cheer rather than fear. Offered on weekends in October, 10am-5pm and included with regular park admission. This special, family event includes friendly monsters, a kid-friendly maze, crafts, and trick-or-treat stations. 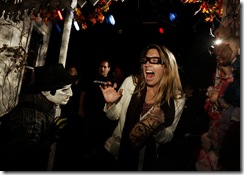 Universal Studios Hollywood is offering its Halloween Horror Nights on consecutive weekends and select weeknights in October. This separate ticket event begins at 7pm and is not recommended for children under 13. Horror Nights capitalizes on Universal’s movie franchises by combining the themes and characters into mazes, scare zones and the “Terror Tram” attraction. How about a stroll through the Friday the 13th maze with Jason followed by working your way through A Nightmare on Elm Street maze with Freddy Krueger? All Universal attractions are open during Horror Nights. Costumes are not allowed. Tickets start at $44. For more information visit: Universal Horror Nights 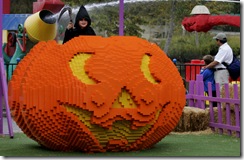 Every Saturday in October from 5-9pm, LEGOLAND California is transformed into a not-too-spooky Halloween haven for Brick-or-Treat Party Nights featuring costume contests, dance contests, a pumpkin patch building event, “howler of the hour” contests, nighttime trick-or-treating on one of two Brick-or-Treat Trails, live music and entertainment.

During the day every Saturday and Sunday in October revelers 12 and under trick-or-treat on the Park’s exclusive Brick-or-Treat Trail, where they gather goodies including delicious treats, trading cards and other surprises. Guests can also enjoy the new musical “Mail Order Monsters” and pose with a giant LEGO® jack-o-lantern. All Brick-or-Treat and Party Nights festivities are included in the price of regular one-day admission to LEGOLAND California.  Special tickets for Brick-or-Treat Party Nights only are available for $30. During Brick-or-Treat, LEGOLAND is open from 10 a.m. to 9 p.m. on Saturdays and 10 a.m. to 5 p.m. on Sundays. For more information visit: Legoland