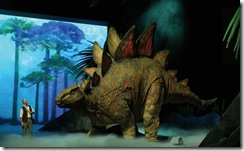 I’m really excited that tomorrow I’ll be heading to The Honda Center in Anaheim to see one of the final performances of WALKING WITH DINOSAURS.  The original company of WALKING WITH DINOSAURS – The Arena Spectacular, which has toured North America since July 2007, will play its final engagements at The Honda Center in Anaheim, CA September 1-5, followed by performances at The STAPLES Center in downtown Los Angeles, September 9-12.  The show originally played the Los Angeles area in 2008 with an unprecedented sold-out run at both venues.  WALKING WITH DINOSAURS – The Arena Spectacular is based on the award-winning BBC Television Series.  In this production, seventeen roaring, snarling “live” dinosaurs mesmerize the audience as if they were back in the time when dinosaurs walked the earth. The dinosaurs are life-size, making the show so immense, it could only fit in arenas.  The “live” dinosaurs are actually a brilliant combination of technology and traditional theater arts like lighting, acting, scenery and puppetry.  The show is so enormous that they travel around North America in 25 trucks and production cost is $20 million.

View Full Album
In WALKING WITH DINOSAURS, ten species are represented from the 200 million year reign of the dinosaurs.  Wow, 200 million years?  How do I explain that concept to Chip when I CAN HARDLY grasp it?  Anyway, I’m personally thrilled to see that the Stegosaurus, my favorite dinosaur, is in the show’s cast.  The show depicts the dinosaurs’ evolution which includes the climatic and tectonic changes that lead to the demise of many of the species.  It also shows how the carnivores and herbivores behaved.  The history of the world is played out with the splitting of the earth’s continents, and the transition from the arid desert of the Triassic period is given over to the lush green prairies and forces of the later Jurassic.  Oceans form, volcanoes erupt, a forest catches fire -- all leading to the impact of the massive comet, which struck the earth, and forced the extinction of the dinosaurs.  Apparently, all with a 35 minute first act, 20 minute intermission and a 35 minute second act!  I think I’m looking forward to it more than the kids?!

Review: I attended opening night with my 4 year old son, 5 year old boy/girl twin neighbors and their mom.  We were all enthralled by the show which is narrated by a rugged paleontologist who guides the audience through the 200 million year story.  Some young children may be frightened by the full sized, “real” dinosaurs.  Video is on the show’s site and it is recommended showing that to kids to get an idea of how they might feel at the show.  Our 3 kids were really into the show and asked lots of questions.  There are a few loud dinosaur roars that were tough on the toddler ears.  If you can afford it, the price of sitting closer to the dinosaurs is well worth it.  All seats are good and it may be wise to sit further back if little ones would be more comfortable away from a full grown, roaring T-Rex.  Overall, this is a show I highly recommend as being really fun for the whole family.  I wasn't feeling antsy or checking my watch, like I do at some of the "kiddie shows."  When the Stegosaurus came out during the Jurassic Period, it was like seeing Yo Gabba Gabba for me!  I leaned over to the kids and made sure they knew that was my favorite.  Who doesn't like dinosaurs?  Hot tip: Goldstar has half-priced tickets currently available on their site for The Staples Center shows.

Tickets are now on sale.  Honda Center tickets ($22.50-79.00) can be purchased at the Honda Center Box Office and at any Ticketmaster outlet, charge by phone 1-800-745-3000 or online at ticketmaster.com.  Tickets for STAPLES Center ($39-79.00) can be purchased at the STAPLES Center Box Office, all Ticketmaster outlets, charge by phone 213-480-3232 or online at ticketmaster.com. For groups, contact the local arena directly.  For more information, please visit www.dinosaurlive.com. Video of the show is available on the site under “Meet The Dinos” tab in the middle of the front page.

Disclosure: I was given tickets to the show for review purposes and complimentary parking in the media lot.  No compensation was received.
Posted by Elizabeth at 11:23 PM No comments: 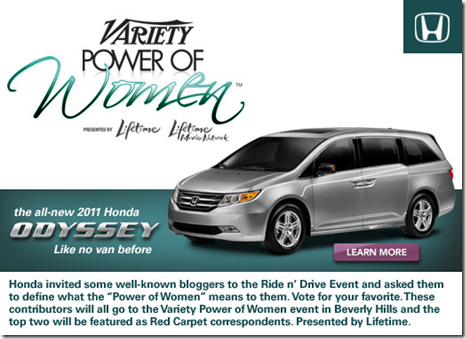 I am honored to have been chosen by Honda along with ten other amazing bloggers from all over the country to attend the Variety Power of Women Event in Beverly Hills on September, 30.  The funny thing is I live really close to Beverly Hills, so I guess I’m the ideal, all expenses paid, winner!  Variety has invited two of the bloggers to be Red Carpet Correspondents at the event to be chosen via a contest.  All eleven of us wrote what the Power of Women means to us and our essays are posted on Honda’s Facebook page.  The two bloggers whose essays receive the most votes will get to be the Red Carpet Correspondents.  Here is my essay and if you would like to vote for me, just go to the Honda contest page and click “vote”.  That’s it!  The voting period ends Thursday, August 26, 8:59pm PDT.  Thank you!

To me, “Power of Women” means harnessing the greatness of all the women who have gone before us, who have paved the way for us, the women of 2010. I’m not just referring to famous historic women. I mean all women: our mothers, grandmothers and their mothers and sisters. For every girl over the centuries who dreamed of creating something, there was at least one older female who supported her. Women supporting women, networking, mentoring and encouraging women and girls from all backgrounds to pursue their dreams and make a difference in their communities is a key element of today’s Power of Women. As I look back over the story of my life, I can think of so many women, some who only played walk-on roles, but who inspired, influenced or continue to echo through me. I just know that we can continue the momentum for the women yet to come.