I attended a blogging conference, BlogHer, this past weekend and met with some executives of E.L.F. Cosmetics (Eyes, Lips, Face). They have a very affordable make up line that has all items for $1. They have expanded to add bath and body, mineral and a studio line. All very affordable. Whole kits for under $20. I was given some items to sample. I must say that for $1-$4 the items are very good. I think the amounts are less than you would normally get from say MAC or Bobbi Brown. But, you aren't paying department store prices either. Plus, I don't usually finish a whole thing of make up anyway.

So, I'm not a huge make up user...I don't wear it everyday. Who has the time? The cool thing about E.L.F. make up is that you can try stuff out and not feel like you are throwing money away. I wanted to post this because I know a lot of us are trying to save money. Also, since E.L.F. is mostly available online only, it's not like you could check it out in person. I viewed their entire line and spoke with the creator for several minutes.

The E.L.F. execs provided us (bloggers) with a code that is valid for the next week. With any $10 order, they will include a free Mini Makeup Collection, which is regularly $15. So, you spend $10 and receive $25 worth of stuff. Good way to check it out. Here is the code: BLOGHER
Posted by Elizabeth at 12:47 AM No comments:

Random.org has selected #23 as the winner of my sponsorship. Congrats to Amy, Selfish Mom!

Traded My BMW for a Minivan is thrilled to be offering one $100 sponsorship to any blogger attending BlogHer 2009 in Chicago this week! Traded my BMW for a Minivan understands economic times are tough and every little bit helps. That's why I want to sponsor one attendee!!!!

How to enter: Enter a comment....Any comment....Below. Contest has been extended due to the HUGE amount of interest: Entry deadline is Thurs, July 23 at 6:00 pm Central Time. Leave your e-mail address so I can contact you. Winner will be selected at random from random.org. Winner will be presented with $100 prize in a grand ceremony in the Sheraton gift shop by one member of Traded My BMW for a Minivan's steering committee. Winner must be attending BlogHer and be present at the gift shop ceremony to win. Thank you and good luck!
Posted by Elizabeth at 10:27 PM 24 comments:

I'm Running Off to the Circus

My life is pretty much a three ring circus filled with clowns, animals and death-defying-to-emergency-room tricks. So it seems quite appropriate that The Ringling Brothers and Barnum & Bailey (RBBB) circus is rolling into Los Angeles this week. I'm going to opening night with Chip and actually looking forward to it. I recently attended a press event for RBBB and the current show, Zing Zang Zoom! at The Magic Castle in Hollywood. I went to the press event with an open mind. I fully remember attending the RBBB circus in my youth and being really bored. There was lots of down time in the show and I recall being disappointed. That's pretty much the reason I never really made much of a point of trying to go again. But, now my eldest, Chip, just turned 3 and is of "circus age", so I figured I'd revisit the topic. I headed to The Magic Castle with Lulu in tow and an open mind. First, I met with Shanda Sawyer, Director and Jim Steinmeyer, Illusion Designer. They were both so enthusiastic about the show, it really got me fired up. First of all, the show incorporates a lot of magic. The show is in a 360 degree environment, at the Staples Center, quite a challenge for a magical show. Consider that most magic shows are on a stage with an audience in front, thus allowing for illusions to be performed taking advantage of the audience's point of view. So I'm really excited to see what it's all about. Shanda and Jim mentioned that a 4-ton elephant disappears AND a man turns into a tiger in the air! Ok, I was even more intrigued. Jim and Shanda told us some interesting facts about the circus: They still travel by train, making RBBB one of the "greenest" companies in the world. The circus train is over a mile long. All of the props, costumes, set and equipment must be able to fit into train cars--adding another layer of challenge to designing Zing Zang Zoom!

Next we met with Zingmaster Alex Ramon. Although he has 10 years of experience as a magician, Alex is only 24 years old! He is giving "ringmaster" a twist with this show by being the Zingmaster. Alex is onstage for almost the entire show, and some days he does three shows! Ah, youth. Alex told us that the show is all about fun-filled magic merging with traditional circus arts to create a world of infinite possibilities. Plus, there is a storyline that carries through the show. He even involves the audience in various ways including selecting kids to come down to the circus stage to levitate their parents.

The part I'm most interested in is the All Access Pre-show which is free with your ticket. It starts an hour before the show and allows kids to join Clown College, meet the performers up close, try on costumes and even see an elephant that paints! I think this will be something Chip would really dig.

For more information about the circus and to find out when it will be visiting your neck of the woods, visit the official website Ringling.com

Zing Zang Zoom will be in Los Angeles, Anaheim and Ontario from July 8th to August 2nd. Tickets range in price from $12-$90. Ringling Bros and Barnum & Bailey have been kind enough to extend a discount code to my readers in Southern California. You can get a 4-pack of tickets for $44 when you enter the promo code: Mom on Ticketmaster.com The code needs to be entered into the MC Promotion box on Ticketmaster. You must purchase a minimum of 4 tickets to get the discounted price, but, after that each additional ticket is still only $11. Not valid on Circus Celebrity/Front Row/VIP seats and facility fees do apply.

Random.org has chosen a winner for the Flip Video Camera: Elisa from California.  Thanks to all my readers for entering.....More giveaways coming up! 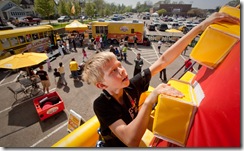 Oscar Mayer Lunchables Lunch Combinations is doing a "Lunch Your Tummy Right Tour" this summer. Kids are different and have different interests when it comes to sports. But, most of all, they need some encouragement to participate in sports and get on the road to a healthy, active life. The Tour is heading cross country with stops in many cities. Their aim is to inspire kids to achieve success. Visit Lunchables to see the full tour schedule, see how your kids can enter to win a week at Camp Woodward and play Lunchables games.

As part of the Tour, kids will also be encouraged to get active by climbing a giant inflatable wall and playing a series of educational games on an interactive bus. “The Lunchables team believes that a well-lunched tummy is the key to success,” said Darin Dugan, Senior Director of Marketing, Lunchables. “The Lunchables Lunch Your Tummy Right Tour is the perfect outlet to help kids discover and enhance their talents.”

Oscar Mayer Lunchables is promoting The "Lunch Your Tummy Right Tour" with Flip Video. They sent me a Flip to try out. I love it! I'm hooked! It is so easy to use...I didn't even have a chance to read the directions and I was able to use it no problem. It's small, light and easy to tuck into my bag and pull out in a second. All those times when you wish you could catch something on video? Now you can. And the quality is amazing. The best part is that it's all digital. You record on the Flip and then you can download to your computer. This Flip Video Ultra records 120 minutes. No tapes or disks to deal with! With my life spinning out of control at times with two toddlers, the is exactly what I need. I was able to take it to Chip's last day of preschool and get some really cute clips with his classmates and teachers. Then you just slide out the USB connection on the side of the Flip and plug directly into the USB port on your computer. How awesome is that?

It gets better....The nice people at Oscar Mayer Lunchables have given me a Flip Ultra to giveaway to one of my readers! With a MSRP of $149.99, The Flip is an excellent way to capture your summer memories. Here is how you enter: Contest period runs from Wednesday, July 1, 2009 at midnight (Pacific) until Wednesday, July 8, 2009 at midnight (Pacific). Enter by leaving a comment, any comment and leave your e-mail address. If you don't leave your e-mail address, I cannot contact you if you win and your entry will be disqualified. One entry per person. Winner must provide a US mailing address. At the end of the contest period, I will utilize Random.org to randomly choose a winner. Winner will be announced the business day following the end of the contest period. Winner has 72 hours to respond to my e-mail. If winner does not respond within 72 hours, The Flip will go to the second place winner as decided by Random.org. Good luck!

Check me out on the Los Angeles Moms Blog today: Diaper Dealer
Posted by Elizabeth at 1:36 PM 3 comments: