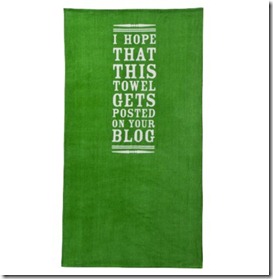 I came across this towel a few weeks back while scanning through SheFinds top picks for beach towels for this summer. I became sort of intrigued by it. Not the towel itself, really. I wanted to know the story behind it. The green color and the font and layout seem totally random. Why is it ONLY offered in green? Why does it sort of read like some Olde English Proverb you would see hanging in a Ye Olde Publick house or some such establishment? [Sort of like the sign on the right that I found here].

Further, I wondered if the message is supposed to be from the creator of the towel or is it to be assumed by the owner of the towel as a message to anyone who sees them lying on it/toweling off with it/hanging it to dry. If it is from the creator, what IS it exactly they are trying to say? There is nothing saying who created the towel. All I know is that it is available online only at Target for $9.99. Which is a pretty good deal for a beach towel. I wonder if it’s a decent beach towel. I saved the link for some reason. I had no intention of buying the towel. I have plenty of beach towels. I wasn’t going to post it on my blog. Why would I? In fact, it may very well be a snarky dig at me and my people—bloggers. Tonight I noticed the link I saved earlier in the season. The towel is still there…Not sold out…Not marked down. Just there. Maybe I’m in a mood. Maybe I don’t want to destroy the hope.


I’m on CBS Los Angeles with 5 Top Photographers in Los Angeles for Family, Dogs, Sports & Action, Maternity and Weddings.
Posted by Elizabeth at 4:34 PM No comments: