The Easy Bake Oven of my childhood looks like this:

All orange as things were back then--unless they were avocado green or harvest gold.....

Gleefully, I set it up and called Chip (2.5)  and Lulu (11 mos) over.  They smiled at me, but clearly didn't understand the magnitude of the moment.  Undaunted, I proceeded to make my first cake, 35 years in the making, literally.  Yellow cake (included), mixed it up, put it in the pan and into the oven.  This is what my oven looks like: 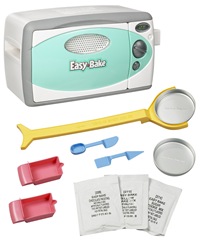 And I walked away, eager to pull my golden, delicious morsel out.  I returned 15 minutes later to my creation.  A lovely, tiny, cake.  Next I whipped up the chocolate frosting (included) and frosted my cake!  Chip was excited about the frosting part and actually helped.  Coincidentally it was Surfer Guy's birthday the next day so we called him in and belted out our rendition of Happy Birthday.  We all had a bite, including Lulu.  It was quite tasty, but left us all wanting more.

As I researched this piece, I learned that it is the 45th Anniversary of the Easy Bake Oven.  In honor of this, the oven is returning to its original aqua color.  In addition, Hasbro, the makers of Easy Bake has launched a search for "Baker of the Year".  The contest allows kids and their adult "assistant" to enter their favorite recipe.  One winner per month will be chosen through February 2009 and all winners will be invited to Walt Disney World for a final baking challenge to be held in May.  For complete info check out www.easybake.com

I most assuredly recommend this Easy Bake Oven but think it is best suited to kids in the 7-12 year old age range.  In fact, I'm passing mine along to the 8 year old daughter of a friend who is dying to have it.  So, for a brief, shining moment, I did finally have my Easy Bake Oven.  Funny how you feel when you get something you always wanted, y'know?  It only seems right to pay it forward.

There is NOTHING like an Easy Bake. Although I think 12 year old are probably too old for it

I HAD one as a kid. I loved it but it didn't actually cook the batter. That's okay cuz I like pudding, too.
I also had a Stretch Armstrong and a Big Wheel and an Inchworm.
Life was pretty sweet.

You are so right. I always wanted an easy bake oven and my mother never let me get one. Why not? I grew up to be a pastry chef and writer and now just a mother and writer. I troll the aisles of Target and ALWAYS stop and gaze at the easy bake oven. I applaud you for buying one and making something. I'm going to buy one myself this week. Thanks for the inspiration -- and I loved being in the show with you this week. You're wonderful!