Isn't it funny how all of a sudden you have a theme in your life and you had nothing to do with it?  Over the past couple of weeks, that's been happening to me with cooking.  First off, many of you know I'm a Wii Enthusiast and just love video games.  I was totally pumped to be invited to an event being put on by The Food Network with Iron Chef Michael Symon.  The party was to announce the new Wii game, Food Network: Cook or be Cooked!  By Namco Bandai Games.  I had so much fun at the event.  First of all, I got to meet Chef Symon and spoke with him for a quite a few minutes.  He is so cool and such a fun guy.  He and I had a really funny exchange about Iron Chef America.  I asked him about the Chef line up at the beginning of the show.  I had heard that the chef's weren't really there if they weren't going to be competing in that show.  He confirmed that was true.  Then I asked him if he was going to take his model home to keep and to freak people out.  Turns out it's a real person who looks like the chefs, but is a stand in.  I had thought they were mannequins!  We both cracked up laughing.  See what you learn at these parties?

Namco Bandai had a bunch of plasma tvs set up with the game and we all got to take a turn.  You actually get to use the Wii controls as if you are cooking and using real utensils.  There are recipe challenges and you really learn how to cook and use proper professional technique.  The highlight for

me was when Michael Morishita of Namco Bandai made a dish playing the game while Chef Symon made the exact same dish following along with the game, but in the demonstration kitchen!  It was so fun to watch them compete.  They both 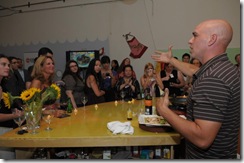 made a chicken broccoli stir fry from scratch.  The best part of the event was the fact that I really got to taste Chef Symon's stir fry.  On the way out, I received a couple of cool gifts: Food Network Magazine, which I didn't know about and a utensil from The Food Network products line that looks like a giant tweezers.  Food Network: Cooked or Be Cooked is coming out next month.  Stay tuned to my blog for a giveaway.

The second part of the cooking theme was when I was invited to have lunch with cookbook author Annabel Karmel.  I had actually heard Annabel interviewed on a radio show about cooking a few years back and was intrigued with her angle: Healthy cooking for kids.  In advance of our lunch meeting, Annabel's publisher sent over a sampling of her cookbooks (she has written about 20 of them!)  Some of my favorite titles: I Can Eat a Rainbow which is set up like a child's board book and shows fruits and vegetables in a colorful fun way. Mom and Me Cookbook which I really love because it actually shows photos of each step in the preparation of each recipe.  This is really helpful to someone like me, who isn't super confident in the kitchen AND children who are not yet able to read.

Next I was off to The Ivy to meet Annabel for lunch.  Annabel is an absolutely

lovely woman.  She is British and resides in London with her husband and 3 children.  Her motivation for launching her cookbook career was the tragic death of her first baby, Natasha.  She then became very over protective of what her next baby ate.  Her books are not just cookbooks, they contain many nutrition tips and information in a really manageable format.  Annabel's books are

extremely easy to read and fun to look at.  Chip and I made Sweet and Sour Chicken which was soooo easy to make, I was really surprised.  The recipes are for meals that the whole family can eat.  I highly recommend Annabel Karmel's cookbooks to anyone with kids.  You can find a lot of recipes on AnnabelKarmel.com....Isn't Annabel Karmel just the best name for someone who writes cookbooks for children?

Now for number three!  My very good friend Maria works on the show Top Chef which was nominated for eleven Emmy Awards.  She invited me to be her guest at the Top Chef Emmy party!  It was so much fun and the food was my favorite, Mexican.  It was really great to meet the people Maria works with.  Top Chef is a fun show and the current season is underway.  New episodes every Wednesday night, check your local listings for times.
So now you see.....Good food does come in threes.
Posted by Elizabeth at 5:46 PM

I love Annabel Karmel's website! I'm going to start making things my kids will love! There is just so much info on there, from pregnancy and beyond! By the way, on the top of the webpage is picture of Manhattan Beach Pier... Is she a local?

Yes, Annabel's site is excellent. She is based in London. Really starting to make a name for herself in the US.