The past week was 4 parties-full.  This week I have NO PARTIES.  Feast or famine on the circuit, for sure.  So here is the week that was:
Got Milk?

I was invited, along with Chip and Lulu to a party for Got Milk in The Backyard at the W Hotel in Los Angeles.  The event was really like being in someone’s backyard, complete with ice skating!  Rebecca Romijn was unveiled as the new Got Milk mom.  She was there along with her husband, Jerry O’Connell.  Also in attendance was Anita Renfroe, who, to be honest was someone I “knew” but didn’t know her name.  She is a real mom who became a YouTube phenomenon singing the Momisms song to the tune of The William Tell Overture.  I got to speak with Anita for quite a while, and she shared with us some of her tips for building strong families.  The main reason for the event was to kick off the “Great Gallon Give” campaign.  This campaign will give away 200,000 gallons of milk online at whymilk.com and at 19 events across the country.  Rebecca spoke to our gathering and asked us to encourage people to pass a “virtual” gallon of milk to Facebook friends. (For every virtual gallon passed on Facebook.com/MilkMustache, $1 will go to Feeding America, America’s largest network of food banks, up to $100,000.)  This was a really nice event with activities for the kids and yummy bites that fit the theme of the event: chocolate chip cookies, milkshakes and grilled cheese sandwiches.  The highlight for Chip was the ice rink, Chill, which is not real ice, but you can wear regular ice skates and skate on it.  It is some sort of synthetic ice-like surface….I’d never heard of such a thing, had you?  Chip had to be dragged off the “ice” at the end of the event, he was having that much fun, his first time on ice skates.

Go to whymilk.com to find out if the Great Gallon Give is coming to your town.   Local events are planned for 20 markets from coast-to-coast.  In total, more than 200,000 gallons of milk will be distributed.   While there, you can register for a chance to win a year’s worth of free milk.  The first 125,000 people to enter the contest will receive a downloadable coupon for free milk with purchase.

When the Suave team contacted me and asked if I’d like to have a Suave Style party at my house, invite 10 friends and a professional hairstylist to do all our hair, I couldn’t say, “Heck, yeah!” fast enough.  So this past Wednesday I threw my Suave Professionals Party.  Suave did a blind test with salon professionals and they were all surprised to find out the products they were using were Suave.  They have just rolled out a commercial showing the test.  They have also relaunched the line and are adding several new products this year.  There is a cultural shift afoot in the US: the move to value in consumer products.  Everyone is looking to get the best possible products they can and they aren’t willing to spend a lot of money for it.  Enter Suave Professionals.  I was first introduced to Suave Professionals when I was at BlogHer in Chicago and met with Luke O’Connor of Lukaro Salon in Beverly Hills, which is the same salon where I get my eyebrows done.  Luke is a celebrity stylist spokesperson for Suave and he stands behind the products.  If the owner of a high end salon is pro-Suave, I started to believe I could be too.   All this to say, I was really happy to get a chance to check out the new line. 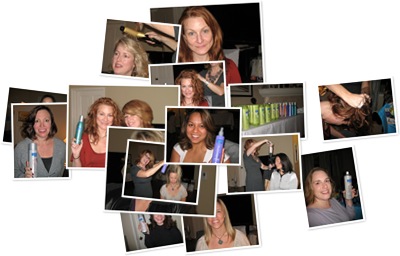 View Full Album
I’m really pretty lame about doing my hair, I think I’ve written about this before.  With two kids and my crazy life, I frequently just comb my hair wet and let it air dry—which is fine.  It works most of the time.  But, I do need to look a little more pulled together on occasion and was really looking forward to getting some tips on how to use the latest Suave Professionals products.  Hollywood stylist-to-the-stars, Shannon Hughey came over and showed us all how to do our hair.  The really interesting thing about the party was that all of us at the party had totally different hair: long, short, curly, straight, colored, dry and the list went on.  Shannon handled each of our heads like a pro.  Some of our favorite products were the Suave Professionals Healthy Curls Mousse, Volumizing Root Lifter Spray and the Weather Protection 365 Hairspray (available in stores this Spring).  The hairspray smelled so good and went on so lightly yet really held the style, that was the one I was most interested in trying on my own.  We also received a sampling of the new shampoos and conditioners soon to be available in a store near you: Rosemary Mint, Almond & Shea Butter, and Aloe Vera & Ginseng.
While my friends and I took turns getting new ‘dos, we sipped “Suave-atinis” and dined on salads, pizza and pasta courtesy of Suave.  Shannon was really awesome and brought an info board where she showed us the latest trends and looks for Spring 2010.  One trend I found interesting was very blonde hair—I think I may have to go platinum by April or be left behind?  I encourage everyone to keep your eyes open for these new Suave Professionals products as they hit the shelves.  It’s now been proven to myself and my friends that Suave Professionals are really good products for a really great price!

I was invited to the 25th Anniversary Party for The Discovery Channel this past Thursday.  This party was part of the Television Winter Press Tour and held in the Horseshoe Garden at the Langham Huntington Hotel in Pasadena.  Now this party was a total hoot.  Stacy London and Clinton Kelly of What Not To Wear (TLC) was there.  Stacy chatted up my friend Kate and even promised to take her shopping the next time Kate is in New York.  Myron Mixon of BBQ Pitmasters (TLC) catered the food….It was reality meeting reality and mighty tasty.  I saw Matt & Amy Roloff of Little People, Big World (TLC).  I had a really fun chat with Bill Nye, The Science
Guy who is best friends with Ed Begley, Jr. and often appears on his show, Living with Ed (Planet Green).  Speaking of Planet Green, Homaru Cantu and Ben Roche of Future Food on said network, were there, too.  An “interesting” interpretation of sushi as futuristic real food was served.  Hard to explain, but it was fruity and sweet foods made to look like sushi.  I ran into a college friend of mine who I hadn’t seen since college who is working for Discovery, that was a total kick to catch up with her.  On the way out I was given a really nice Discovery Channel 25th Anniversary messenger bag which is definitely the nicest swag bag bag I’ve ever received.

My last party of the week was co-presented by KCRW and Tourism Australia exploring the essence of food and drink Down Under. The event took place on the roof of the Paley Center for Media in Beverly Hills.  I had such a great time at this event.  It started off with KCRW’s Evan Kleiman, host of Good Food Live! hosting a cooking demo.  Evan and renowned Aussie chef Curtis Stone conducted a rooftop cooking demo featuring lamb.  I’m a fan of Curtis’ ever since I started watching him on his show “Take Home Chef”.  Next, fish expert and restaurateur Pete Evans stepped up and made a really tasty Australian Panzanella (Italian bread salad) with seafood, and Senior Brand Manager for Wine

Australia, James Gosper, gave us some great tips on Australian wines.  The main point he wanted to convey was, it’s not all Shiraz!  I really love Australian wine and often find some really good ones that are really inexpensive.  The event featured so many different Australian wines.  I wish I didn’t have to drive or I would have tried more of them.  The cooking demo was a really entertaining, I always find that Australians have such a fun attitude and great sense of humor.  After the demo, my friends and I got to speak with Pete Evans who owns several restaurants in Australia, all part of his Hugos Group.  Pete was a really great guy to talk to and although he’s not really well known in the US, he is a well known tv chef in Australia.  One category found in most of his restaurants is pizza.  Not just ordinary pizza.  We talked a lot about all the different kinds of pizza he makes.  I told him I’m not a fan of pineapple.  Pete convinced me that he uses only the best, most amazing pineapple.  He really did convince me.  Now I want to go to Australia and take Pete up on the offer he made to us to come visit him and try his pineapple pizza.  Surfer Guy would love to go to Australia.  I would love to go to Australia.  So, this is my new travel goal, Australia, and soon!
Posted by Elizabeth at 12:36 AM

I'm new to your blog. Looks like you have a packed schedule :)

Hi there-really hoping to connect with you as I am new to L.A. I am Daryl Hudson's partner, V.P.of Tourism Australia, mother of four and involved with corporate marketing in the film and television industry here and in Canada... I also have a charitable foundation and fund and develope the arts, home hospice and safety and prevention causes.

It would be brilliant to share information with you in the future. For now, I am truly hoping for some support with where I might find some urban furnishings, a set of dishes and items to set up shop here in our Manhatten Beach area home...any suggestion of where to shop for style (for great prices???) would be amazing.

Thank you for reaching out to a newcomer...

Hi there-really hoping to connect with you as I am new to L.A. I am Daryl Hudson's partner, V.P.of Tourism Australia, mother of four and involved with corporate marketing in the film and television industry here and in Canada... I also have a charitable foundation and fund and develope the arts, home hospice and safety and prevention causes.

It would be brilliant to share information with you in the future. For now, I am truly hoping for some support with where I might find some urban furnishings, a set of dishes and items to set up shop here in our Manhatten Beach area home...any suggestion of where to shop for style (for great prices???) would be amazing.

Thank you for reaching out to a newcomer...