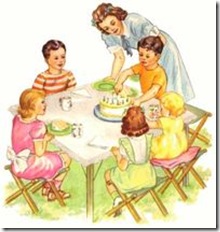 Tomorrow I have back to back birthday parties to attend.  One at 11am for one of Lulu’s classmates, a girl who is having a “princess” theme.  Lulu should be in her glory even though all her classmates are just turning 3 and are still very much into parallel play.  Chip has been invited to his first birthday party of his nursery school classroom’s “birthday season”, which this year spans from January to June.  This one is for a boy, is a “Star Wars” theme and begins at 1pm.  Looks like we are going to be cutting it close OR I may have to enlist Surfer Guy and do a hand-off.  This all brought back memories of how I was feeling during “High Season” last year and the post I wrote for the LA Moms Blog which closed this past July.  Tonight seems the perfect time to revisit that post:

Must love kids.  My kids and others.  Or be able to fake it.  Due to the fact that every child in my son’s preschool class was born between March and June, we are currently in High Birthday Season Hell.

The ideal candidate will be happy, jovial and possess the stamina necessary to jump into the very busy 4th birthday party season just underway for the members of my son Chip’s preschool class at Lad & Lassie Preschool.  Must be able to purchase birthday gifts, appropriate cards and wrap.  A love of Costco cake and pizza a definite plus.  The need to be able to simultaneously take care of 2 year old Lulu while making sure that Chip does not monopolize Spiderman (Batman, Princess Aurora, The Fireman) while they are trying to give extra attention to the guest of honor is a must.

I’m open to creative individuals who know how to finesse an arrival in order to avoid “the arts & crafts nightmare” portion of the party.  Allowing Chip to duke it out with other kids for the pinata candy is also encouraged.  True interest in being stuck for hours at parties in parks, at the beach, kid’s gyms and in backyards while juggling plates, juice boxes and goody bags is a plus although not a requirement.  The vast majority of the parents and siblings of Chip’s classmates are perfectly nice.  The one or two who try to suck you into their pyramid schemes will be pointed out to you at your training party.  Chip’s birthday is in June, at the end of the High Birthday Season.  Candidate’s assistance in the planning and execution of Chip’s party would be a bonus opportunity.  This position may be ongoing, seasonally, until both Chip and Lulu are of age to attend drop off birthday parties.  Interested candidates who meet the above requirements please contact Elizabeth at Traded My BMW for a Minivan.

An original post for The Los Angeles Moms Blog

When Elizabeth Peterson isn’t trying buy her way out of certain mom duties, she can be found blogging about stuff she’d rather be doing over on her personal blog: Traded My BMW for a Minivan.

Comments (These are the original comments from the LA Moms Blog)

Wish you lived up here, I could send my husband, who's aghast at the idea of a drop-off party. "Why wouldn't I want to stay and hang out with my kids at the party?" He loves any and all pizza, but I will warn you, every one of your kid's friends would get a soccer ball for a present :)

Great post! It seems like every kid in my son's preschool class was born between March and June, with the exception of my son, who has an August birthday...I thought it was a phenomenon related to his school, but apparently it is everywhere. The parties...almost one per weekend.... Now, the latest trend at my son's school is to bring in cookies, cakes, brownies and favors and have a party in the classroom, which is fine every once in a while, but I swear that there were at least three last week, he came home sugared-up, tired and grumpy (but with a new toy, which was a bonus for him)...Ahh, how I long for the end of Birthday season...

Thank God the birthday party frenzy is almost over for my kids. I remember it well, though, and think you're on to something with this ad.

Posted by Elizabeth at 8:52 PM