This is one of my earliest posts for the soon to be closed Los Angeles Moms Blog. I also performed a version of it in Expressing Motherhood in January 2009. Now that Lulu is obsessed with Tinkerbell, it’s even more perfect that I dust this one off. (And, no, I still haven’t grown up)

I present to you: Peter Pan Mom, originally posted on The Los Angeles Moms Blog, October 27, 2008. 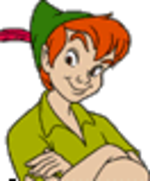 I've pretty much always had a vague understanding that I was sliding along on a type of extended adolescence.  Having fun, not really responsible for much and somewhat incompetent with a lot of practical stuff.  I'm not saying I'm a slacker, I finished college in 4 years and had real jobs.  I just never had much responsibility and not much interest in learning the skills that would help me be a more well-rounded mom/domestic goddess.  More to the point, I found I could pay other people to do stuff I couldn't--like hem my pants.  I even ducked getting married for a while because I thought it was too grown up.  I have Peter Pan Syndrome.  That's fine, and I've been able to accept this fact.  Here's the problem: I now have kids and it's starting to affect them.

First of all, sometimes I forget that I have kids.  NO, I've never forgotten them someplace, or left them in the car.  I mean, that I forget, that I'm not single and childless and can do whatever I want, when I want.  There was an episode of Sex and the City where Miranda begrudgingly goes to Brooklyn to look at a house and while there looks out at Steve and Brady playing outside and has a revelation that she is married and has a kid.  That's me!  I'm still wistful for my life in West Hollywood I left behind three weeks before I gave birth to Chip, to move to the suburbs.  Intellectually, I know that living in my swell apartment would be hell with a baby and a toddler.  But I can still be wistful, can't I?  The turning point of recognizing my Peter Pan Syndrome came when I traded my BMW for a minivan this past spring.

The experience was so transforming that it sent me to the world of Mommy Blogging and was the inspiration for the title of my blog Traded My BMW for a Minivan.  I held onto that BMW with two car seats jammed in back as long as I humanly could.  When I had to start deciding between having strollers in the trunk or buying groceries, I knew it was time to let go.

Then there is the practical stuff.  The stuff that people who are real moms can do: like fold a fitted sheet.  My mother came out from Boston a couple of weeks ago and I asked her to help me fold the laundry.  I actually need another person to fold the sheets with me, like we were folding the American flag or something.  But, I swear unless someone else is holding the other side, I get all tangled up.  She told me she would do it.  I returned and realized she actually folded them up all by herself.  I didn't even bother to ask her to teach me how she did it.  Then she moved on to the task of taking in the waist and hemming Chip's Halloween costume.  Thanks to her Chip will not be tripping through the neighborhood trick or treating this year.  The holidays are coming up.  I have no clue how to cook a turkey or do anything else related to a holiday dinner.  Pies?  Gravy?  Impossible.  This  year my mother-in-law will be in my kitchen cooking Thanksgiving and then my mother comes out for Christmas.  I'm saved for this year!  I'm pretty sure I could never learn to cook a turkey and do it right anyway.  So I'll just watch the sports on TV and eat chips and onion dip, like I have every family holiday since I was five.

Now here is where the whole thing gets scary: the competence appears to diminish with each generation.  My maternal grandmother gardened an acre by herself well into her 70's, canned enough fruits and veggies to feed her entire town (if needed), was a Navy mechanic during WWII and let's just say she knew what she was doing under the hood of a car.  What else?  She ran her own restaurant and her cooking?  Amazing.  My Paternal grandmother was a garment worker and could sew and knit like the wind.  My mother is slightly less competent than the previous generation.  I'm way less competent than my mother.  My daughter's kids are going to be in big trouble.  My poor future grandchildren.

I have friends who actually scrapbook.  They lovingly record every moment of their children's development all with whimsical fonts and cutesy paper.  I once checked out some scrapbooking supplies and started to glaze over.  I was at a mom's night out dinner last night and the mom sitting next to me was talking about her son's baby book and putting his second birthday photos in.  Needless to say, Chip and Lulu have no baby books and the outlook for getting them is bleak.  My neighbor popped over last week and showed me how to remove the burnt food that has been stuck (I thought permanently) to my stove top.  She is younger than I am.  She also brought me a casserole when Lulu was born.  I've never made a casserole.  For anyone.

I remain optimistic that there is hope for me.  That I can get some better life skills on board before the kids are much older.  Let's hope, for their sake.

This is an original post for the Los Angeles Moms Blog.

When she isn't running from family responsibility, Elizabeth Peterson can be found blogging over at Traded My BMW for a Minivan

I liked you before this post, but now I think I love you. I can fold a fitted sheet but I'm still wondering what to do with the photos and where the time comes from.

I can SO relate to this post! Last week, I was jumping up and down because the girls got to carve pumpkins on a field trip. Otherwise, that job would've gone to their granddad (as usual). It's become my personal goal for right now to feel more confident about the domestic life.

Scrapbooking--that especially resonates. I don't get it (boring!), and my photos will probably never be neatly placed in albums or even categorized in bunches.

Basically, I suck at being a housewife, although I'm okay at being a SAHM. So just concentrate on the stuff you do well, and don't beat yourself up about it. You love and take care of your kids--the rest'll sort itself out.

That is the best thing I have read in a long time! Wow, can I ever relate! I can't fold a fitted sheet to save my life. I traded in my car for a minivan and my license plate is WhoNew. Trust me, I know what you are talking about!

At least you are still in CA! I am wistful about Hermosa Beach as I put on another sweatshirt to keep warm (it is full-blown Fall in CT). I just talked to a guy tonight who moved to FLA from TX and says he is tired of all the New Englanders who moved in and are trying to boss him around. I mean, didn't they notice his HAT?

i just roll the sheets into a ball and shove them into the cupboard.
i OWN a sewing machine, yet still bring my son's cub scout patches to the dry cleaner to have them sewn on.
glad i'm not the only one....

I can't even fold a fitted sheet with two people, not even three. I love this post because it is so relatable. I will never be able to do the things my mom can do but you know what, she has never blogged in her life and thinks this site is so cool. She doesn't use an ATM and would you believe, she doesn't pump her own gas. So... realize you are simply a different kind of mom who can teach your children different life skills. You can always hire someone to cook or clean but no one can be the kind of mom you are to your kids. Those are the things they will remember.

Glaze over, that is exactly what happened to me. But I still went ahead and wasted the money on the scrapbooking supplies because I thought that was what a good mom was supposed to do. I guess I am not a good mom, because I only did one page over a year ago. I do take the pics at least, but they are still in the deep freeze on my computer. Maybe when the kids graduate from college I will have them printed up.

Posted by Elizabeth at 1:40 PM