On the 10th anniversary of September 11, this is my view as I write this. I'm sitting poolside at Rancho las Palmas Resort in Rancho Mirage, CA. Lucky me. The glare is kind of uncomfortable on my laptop screen. I have to type through a reflection of myself, wearing a bathing suit and a sun hat. Contrast that with the dress code requirements of many Muslim women. The only reason I'm wearing a head covering is to keep the sun's harmful rays at bay. Not because I am "required" to do so. On September 11, 2001, we were attacked, in an act of war, by those who do not like us and our way of life. They seek to destroy it and continue to do so.

This is the first time I've written about "where I was on Sept. 11, 2001": My first recollection of that morning was being woken up by the phone ringing. I was asleep in my apartment in West Hollywood, CA. I answered the phone next to my bed. It must have been sometime between 7:00-8:00am PST. My mother, who lives outside of Boston (where I grew up) was on the phone. As best as I can recall from a dead sleep, she said something like, "They've flown planes into The World Trade Center and I can't get in touch with your sister." My sister had just graduated from college the previous May and lived and worked in Manhattan. There must have been some discussion about where she lived and worked because I recall stumbling out of bed to my bookshelf where I pulled out my "Fast Map-Manhattan" and began looking at points on the map as I discussed it with my mother. I must have also put the TV on. She also said she couldn't reach my brother, but that was kind of irrelevant, in my opinion, since he lived in Colorado. I started giving my mother the names and addresses of my friends in Manhattan in case my sister needed to go somewhere. I hung up, watched the news of the attacks and got dressed. I walked outside with my dog, Stella, to escape the solitary existence in my apartment. It was like any other day on my street. All hell was breaking loose on the other side of the country and in my neighborhood, everything was normal. Odd.

There are pieces that stick out in my mind from that day. I was clearly upset…Not crying, but worried. I had several good friends who lived within a short 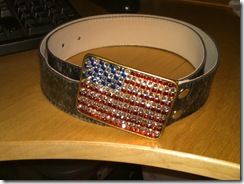 walk from the World Trade Center. One who I stayed with frequently and had just stayed with a month before. On that visit, I had bought an American Flag belt at Century 21, the discount designer department store with its flagship right across the street from the World Trade Center. I remembered debating over the belt because it was $70 and was a lot to spend on a belt. But I loved it and knew I’d wear it a lot, so I got it. Within days of 9/11, I looked at the receipt and saw that I had bought it on 8/11/01. I wondered if I had been directed to buy it by some sort of foreshadowing force? I still think I spent a lot on that belt, but I still wear it. I worried about my sister. I thought about American Airlines Flight 11 from Boston to Los Angeles. That was my most traveled route and on that airline. People who knew called me or e-mailed. I had a friend from Kentucky e-mail me one sentence, “I want to make sure you weren’t on that plane.” Having known her for years, I wasn’t taken aback, she didn’t mince words. I suppose the lack of a return e-mail would have answered her question? I answered everyone with the same response, “No, I wasn’t on the planes, I never took the first flight in the morning.” Which was true. Those first flights to LA from Boston, on United and American, which at the time were the only non-stop airlines flying the route, left at around 7:45am. That was way too early for me to have to get up and get to the airport. I always took the 5:45pm-ish flight. Especially because I was flying “backward in time”, I’d get in at 9pm or so and then just go home and climb into bed. I guess I hung onto that a bit. When some people were saying “I could have been on that plane,” I knew I wouldn’t have. Okay. So what? What was my point? I recognized a lot of the flight attendants on that route. I knew it was a desirable route because there were usually celebrities on the plane for one. I remembered meeting a young flight attendant who told me she didn’t usually get to fly that route because it was a “senior route”. I was oddly familiar in a sort of, “American Airlines LA-Boston-LA frequently flier” way. I got into an argument with my personal trainer that day. I was on edge and although I can’t recall the exact circumstances, it had something to do with me trying to reschedule and assuming the gym would be closed anyway because this was the LA outpost of a chain of gyms founded in Manhattan. He was being a jerk, I thought, and denied the gym would be closed. I told him off, as I recall, about the circumstances and to have some sympathy. Turns out the gym was closed down that day. I switched trainers. My acting class was held as usual. I remembered asking my acting teacher why. He said that that’s what he does. He can’t do anything else to help the situation, so would be holding class as usual. It made sense. Probably made more sense than I can convey here. A guy I was doing some part-time work for was trapped in Atlanta at a conference. He was able to jump into a rental car with strangers and drive to Boston where his son lived to ride things out.

There are other things that stick out in my memory, although they most likely weren’t on September 11, but that week for sure. I found out that people from my hometown in MA had died on the United flight and the American flight. The brother of one of the officials in West Hollywood had been the pilot on one of the Boston-LA flights. I was studying at The Second City in LA and every one of my classmates had the same start to their story, “My mother called me and woke me up.” Even mothers who had no thought their kid was on one of those planes or in New York City called their kids. I remember telling my mother that and she said, “of course”. I wasn’t yet a mother. My sister talked to my mother at some point that day. She went and hung out with her boyfriend’s uncle in mid-town and then made her way to her apartment which wasn’t affected by the disaster. My mother was unhappy she couldn’t reach my brother in COLORADO?! So I logged a call into his voicemail. He called me from the side of the road in the middle of nowhere, in COLORADO, and told me he had blown off our mother’s initial calls because he had just talk to her the day before, which was his birthday. He now couldn’t get through so called me. (Yeah, I left him a voicemail for his birthday yesterday, along with Chip and Lulu chortling “Unc” in the background).

In December of that year, my whole family gathered in New York and stayed with my sister who had moved to Brooklyn with her boyfriend. We went down to Ground Zero to pay our respects and to support the local businesses. I remember peering through the fence a block away from where the WTC towers had stood and seeing that Century 21 was intact, closed for business, but entirely standing. So close to the devastation, I was surprised. We went to a Dunkin Donuts almost directly behind Century 21. It was so cold in NYC. Of course I had thinned blood from living in LA, but it was COLD! We huddled around a table drinking my beloved Dunkin Donuts coffee and some munchkins (donut holes for those uninitiated, poor you). The place was fairly empty and the sun was fading as NYC headed into a Winter night. I looked over and in the corner I noticed a man in a uniform, presumably on break. I looked closer at his patch on his jacket. It was an emblem and it said “New York City Morgue”. I think I was the only one in the group who noticed. It was as if I was sucked away from my family and didn’t hear anything or see anything. A complete sensory paralysis as I took in that man and his job. The streets were so quiet and empty. Of course I knew why he was there. My breath feels erratic now and tears are welling up in my eyes as I recall that moment as clearly as if I were still sitting on that hard plastic stool in that Dunkin Donuts in downtown Manhattan just after Christmas, 2001.

Here I am, ten years later. Much more is known. The heroes of that day. Of course the firefighters and policemen, so many of whom died that day. 324 NYFD lost. Unimaginable. But real. Especially after 10 years. The stories of the ordinary people who stepped up heroically to help people they didn’t even know. Encourage, save, carry and even give their own lives to help. It’s a true American who steps up when the need is the greatest. That echoes so much to me now and is the subtext of one of my favorite quotes: “We are our own first responders.” In a time of disaster, those around you are your best bet for help. Know thy neighbor. Make a plan. Be prepared. But, don’t let it consume your pursuit of the American dream. Realize there is true evil in the world. People who don’t like us simply for who we are. I will not be complacent. We have lost so much. The enemy is still there. God bless America.