Elmo, Sesame Street and me 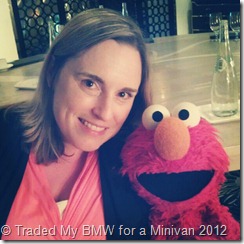 There are only a few things I’ll drop everything for. Meeting Elmo is one of them. Sesame Street is my show from my childhood. These kids today have way too much choice when it comes to tv shows. Chip and Lulu? Sure, they like Sesame Street…But not like I like Sesame Street. So the e-mail came in saying that Elmo would be hanging in an hip restaurant inside a hip Hollywood hotel and “would you like to interview him? Oh, and feel free to bring your kids.” Here is where I need to explain the complete awesomeness of this invitation. Me and Elmo, one on one and the kids can come too. Back when I was in the Sesame Street demographic, living outside Boston, the closest I ever got to this was when the human Sesame Street characters would make public appearances at places like malls. For example, I got to see Gordon at The Northshore Shopping Center in Peabody, MA. I was in the front row with my younger brother and Gordon came up and asked him a question. My brother froze. I whispered the answer and he said it. I spoke to Gordon via my brother while sitting on the floor of a mall in the 1970’s with hundreds of other kids. Now, a personal invitation to meet with Elmo. If I could have told my six year old self to just hold on…

I’ve had some great opportunities with Sesame Street. In honor of the 40th Anniversary in 2009, I was invited to meet with Caroll Spinney who plays Oscar the Grouch and Big Bird and Fran Brill who plays Zoe and Prairie Dawn. Henson Studios, founded by Jim Henson, who created the Muppets has invited me on several occasions and I’ve had the opportunity to meet two of Jim’s five kids, Lisa and Brian. They were both amazing to meet and told fun stories of growing up going to Sesame Street. Imagine that. How totally cool.

A couple of days ago, I picked the kids up straight from school and pointed the minivan towards Hollywood. It was kind of funny when we walked into the restaurant and I asked the girl at the host stand if she knew where Elmo was. She looked at me confused. I said, “red, puppet. Elmo?” A nice man sitting nearby said, “He’s in there.” And pointed to a private dining room. How awesome! One of his people stepped out and showed us in. There we were, sitting with Elmo talking about the latest happenings on Sesame Street. Elmo was fun, enthusiastic and being that he is 3 1/2, he got along especially well with Lulu. In fact, Lulu kind of took over the interview! Here is what we learned: The 43rd season of Sesame Street premieres today on PBS. One of the biggest changes this season has to do with “Elmo’s World” which has been the show closing segment. This season kicks off “Elmo The Musical,” which is replacing “Elmo’s World” after 13 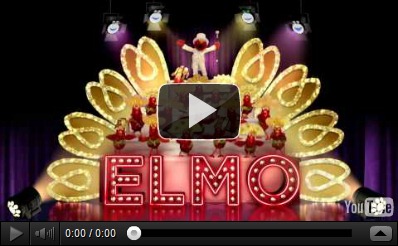 Elmo The Musical new for the 43rd season of Sesame Street
years. In each skit, Elmo will use his imagination to make math musical - singing, dancing and taking kids along with him on fun-filled interactive adventures. Some of the adventures coming up this season include Elmo imagining himself in “Sea Captain the Musical,” “Mountain Climber the Musical,” “Prince Elmo the Musical” and “President the Musical.” The math component builds on the STEAM curriculum that Sesame Street integrated into the show last season. STEAM = Science, Technology, Engineering, Arts and Math and all figures into getting preschoolers to think artistically and critically. I personally think this is really great. Critical thinking is so important and something I have felt to be lacking in education. 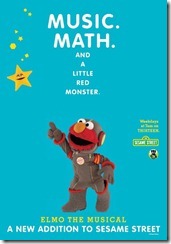 As usual, there will be many celebrities this season, including Charlize Theron, Maya Rudolph, Steve Carell and Don Cheadle. Elmo told me that he is really excited that the band Train and rapper Common will be visiting Sesame Street this season too. There will also be muppet spoofs giving nods to popular shows. We can look forward to “Birdwalk Empire” and “Upside Downtown Abbey.”

Elmo gave Chip and Lulu some goodies from the Sesame Street Store. The store is a great place to look for Sesame merchandise that you don’t really see anywhere else. There are plenty of things for grown ups, the iPad cases, watches, reusable tote bags and coffee mugs are some of my favorites.
Posted by Elizabeth at 12:06 AM