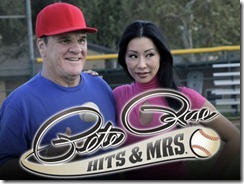 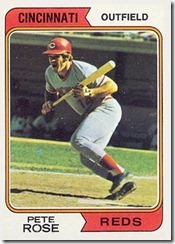 Posted by Elizabeth at 2:01 AM

Having grown up in Cincinnati watching the "Hit King", I can tell you that the day he hit 4192 was an awesome day. He really was remarkable. Sadly, we are all guilty of doing things we later regret. For some, the consequences seem to live on and on. I feel for Rose that this will probably follow him to the grave...unable to shake this bad choice that he now regrets. Does that mean he should not be recognized for what he did accomplish? I don't think so.

I did not know about this show before seeing your Facebook posts. I will certainly have to check it out. I don't blame him for wanting to have his voice heard.

Adding to that, Cincinnati has not forgotten him. The Cincinnati Reds Hall of Fame and Museum has a huge wall with one ball for every hit. It really puts things into prospective. They also have an area of Red flowers with one white one indicating where that hit landed. (they have a new stadium now). It is worth a visit if in the Cincy area.

nice post, liz. i love the title of their show-very clever. btw, it would be easier for me to read if the blog wasn't so wide- i couldn't adjust it.