I loved Strawberry Shortcake when I was a kid. I’m glad that Lulu loves her, too, because that isn’t always the case with things from my childhood. We were really excited to be invited to the Los Angeles show of Strawberry Shortcake: Follow Your Berry Own Beat. The tour will go to 32 cities in the US and Canada through March. We were treated to a pre-show party with yummy snacks including: strawberry milk and strawberry shortcake (of course!) and a meet and greet with Strawberry Shortcake and her friends, Orange Blossom, Lemon Meringue, Blueberry Muffin, Raspberry Torte, Plum Pudding, and Cherry Jam. I miss the prairie outfit that Strawberry Shortcake wore in my youth. However, I also appreciate the modern updates. I really like that the Strawberry Shortcake characters are “appropriately attired” and wear outfits similar to what their little fans wear. 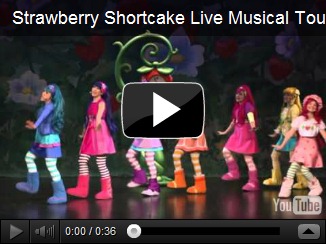 Next we headed to the show at Club Nokia to find our seats. It turned out we had general admission tickets for the open area right in front of the stage. There were a bunch of area rugs covering much of the seating area. However, there was not enough space on the rugs for everyone. It resulted in many of us, including me, sitting directly on the hardwood floor. I found out from people sitting around me who had purchased their tickets, that they did not know they would be sitting on the floor. Many people were frustrated and unprepared, ie: not wearing clothes they would be sitting on the floor in, someone had a back injury, elderly family members, etc. I went with it, but I will admit it wasn’t very comfortable to be sitting on a hard floor. This got especially uncomfy when Lulu wanted to lean against me. I suspect this seating option isn’t going to be at all venues, but I recommend looking into the seating information before you purchase your tickets. [I also want to mention that I noticed people who were needing assistance were able to get help from the Club Nokia staff and in some cases I saw they were moved to seats in the next section] The show entertainment started with The Doodlebops as the opening act. They did a good job getting everyone warmed up for the main attraction. 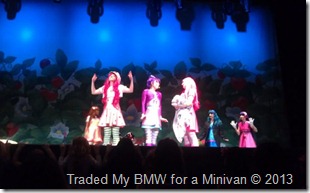 Then, Strawberry Shortcake and her pals took the stage….Suddenly I realized we were in a kiddie mosh pit as Lulu and all the little girls started dancing around. The Hub is a popular channel in our house and Lulu enjoys watching “Strawberry Shortcake’s Berry Bitty Adventures.” The stage show has a lot of the same songs from the tv show. It was fun for the kids to recognize the songs. The premise of the story is a musical adventure set in the whimsical land of Berry Bitty City where the whole town is buzzing with anticipation for the Glitzy Glaze Talent Show. There is plenty of action, group numbers and solos to keep the show humming along at a nice pace. I actually liked the show…And I can’t say that about every kid show…For sure! At the end, all the characters came to the front of the stage and Lulu and her buddies were there reaching up receiving handshakes from Cherry Jam and Blueberry Muffin! It was a total rock star scene and way too cute. If you have a Strawberry Shortcake fan in your family, I highly recommend going to this show. For the tour schedule with cities and ticket information visit, strawberryshortcakeontour.com/tour-dates/.

I have some more good news for you, Strawberry Shortcake: Berry Friends Forever is going to be released on DVD on March 5. It is available for pre-order now.

Disclosure: We received a gift bag with Strawberry Shortcake merchandise as well as complimentary tickets to the show. All opinions and content are my own.

Posted by Elizabeth at 7:50 PM