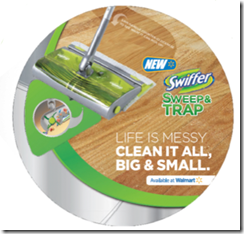 I constantly have my eyes open for products that will make my life easier. I’m already a fan of the Swiffer products so when I was asked if I’d would like to review the new Swiffer Sweep & Trap, I didn’t hesitate. The first thing that caught my attention is that it multitasks…As the name says, it “sweeps” and it “traps.” I love things that do double duty because, theoretically, that should mean I don’t have to buy two separate things. That in turn should mean: I’m saving money!

I opened up the box and assembled the the Sweep & Trap. There are four pieces that click together to make the handle which was easy to do and took about 15 seconds. The handle goes into the Sweep & Trap. You then attach a Swiffer Dry Cloth (two are included in the box) and off you go. To me, this is like a carpet sweeper but it’s for hard surface floors. Although I have plenty of messes around my house, Swiffer actually sent me two packs of test items. The first was a handful of wood shavings and the second was a few nuts and screws which I dumped on my hardwood floor. The Sweep & Trap made quick work of both messes. I then continued around my house a bit testing it out on some travertine and tile. It does what it’s supposed to do, “scoop up” and trap the bigger particles and sweep the floor with the dry cloth.

The great thing about this gadget is that you don’t need to plug it in and it’s quiet. In the past I might have gotten out the vacuum or tried the dustpan and broom method. This is easier and faster than either of those. It is also small which allows you to tuck it somewhere handy--yet out of sight. When you want to empty the trap, you just open it and shake out over the trash. Easy. The only thing you have to replace is the dry cloth. I’m keeping mine. I can’t imagine anyone not being able to use one of these. Go pick one up at Walmart, where they have just hit the shelves. You can connect with Swiffer on Twitter and Facebook.

Posted by Elizabeth at 1:27 AM