Ever since I had a kid, I have wanted to go to Build-A-Bear Workshop.  Yet, even with a second kid, we still hadn’t make it through the doors of a workshop.  That all changed this past Saturday when my family and I were invited to the Build-A-Bear Workshop in Downtown Disney.  The occasion was to kick off a collaboration between Build-A-Bear and ABC Family, “Holly & Hal Moose: Our Uplifting Christmas Adventure” a one-hour feature movie.  This is the first time in Build-A-Bear’s 12 year history that its animals have been brought to life on tv.

Our adventure began when we entered the workshop and were greeted by some nice folks who offered our family the chance to test out the process and make Holly and Hal Moose.  Chip selected Hal and Lulu went with Holly.  I thought it was cute that in the movie, Hal and Holly are brother and sister….Just like Chip and Lulu.  One really cool thing about Hal is that his antlers light up with Christmas lights!  Next, the kids took their moose (yeah, that’s plural for moose, not meese!) to the stuffing machine.  They had a blast getting to step on the foot pedal and watch their moose take shape.  Next they inserted “hearts” and watched as their new friends got stitched up.  Then it was off to the bathing area.  This is where Chip had the most fun.  He 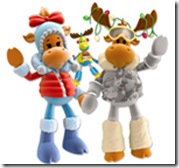 had a blast scrubbing Hal and Lulu followed suit with Holly.  We next selected outfits—the selection is huge.  I really wanted them to get the outfits that match the moose movie “looks”.  Chip loves camouflage and Lulu looks great in light blue, so it worked out perfectly.

Our next stop was over at the movie theaters in Downtown Disney to get a first look at the Holly & Hal Moose: Our Uplifting Christmas Adventure.  It was a really nice event because it was also a drive for Toys for Tots and US Marines were on hand to collect the toys.  Chip and Lulu loved being able to sit with their Holly and Hal and watch Holly and Hal!  It was  really cute movie that inspires viewers to follow their dreams—no matter how big they seem.  You have the opportunity to watch when it makes its nationwide premiere on ABC Family tonight at 7:00 PM ET/PT (encore presentation on Saturday, November 28 at 10:00 AM ET/PT).  I’ve already set our DVR so we can watch Holly and Hal on their adventure again while we cuddle up with our Holly and Hal.  We had a really fun experience and love the opportunity to have the toy and watch the toy onscreen.

Posted by Elizabeth at 1:03 AM