Ever since I was a little kid, I’ve wanted to do martial arts.  Although I had plenty of opportunities to try different things while growing up, martial arts and ceramics are two things I never got to do and really wanted to.  So, I made a rule that when I have kids, if either of them wanted to do martial arts or ceramics, I’d make sure they could.  Something about wanting a better life for your kids than what you had, right?  So when I was invited to a Kamen Rider martial arts/child safety event, I was all over it to attend with Chip.  Kamen Rider Dragon Night is a tv show that airs on the TheCW4Kids on Saturday mornings.  The event was held at an ATA Martial Arts center in Stevenson Ranch,

CA.  It was a really well run event that allowed newbies like Chip to participate in martial arts instruction alongside current students of ATA.  I was secretly thrilled that Chip jumped right into the activities and didn’t miss a beat…And he was among the youngest kids in the place!

ATA executives were on hand and were super supportive and encouraging.  The teachers led the kids in learning some techniques from ATA’s “Kidz ‘N Power” S.A.F.E. program.  Moves such as simple break away maneuvers, combining forceful verbal techniques like shouting “NO!” while simultaneously running away, and role playing with possible stranger dangers.  Then the highlight of the event was an “action class” with Kamen 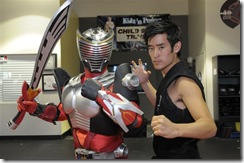 Rider Axe actor and martial artist, Mike Moh, who demonstrated martial art stunts from the show.  Chip and I got to speak with Mike Moh after the “action class” and he told us that he employs “mixed martial arts” techniques in the show.  He also told us that he is NOT allowed to ride the motorcycle on the show.  See, I had questions inquiring minds wanted to know!  You should also definitely check out the Kamen Rider Dragon Night toys.  They have all kinds of cool merchandise.

The event also kicked off the “Join the Kamen Rider Revolution” Sweepstakes at ATA Martial Arts Schools nationwide where entrants can win the Grand Prize Training Day with Kamen Rider actors and Martial Arts Champions Mike Moh and Matt Mullins in Hollywood, CA. Prizing also includes theme park tickets and Kamen Rider toys. The promotion runs from November 7 through December 5, 2009.  You can enter online at www.bandai.com/kamenrider.  Check out the video from the event: 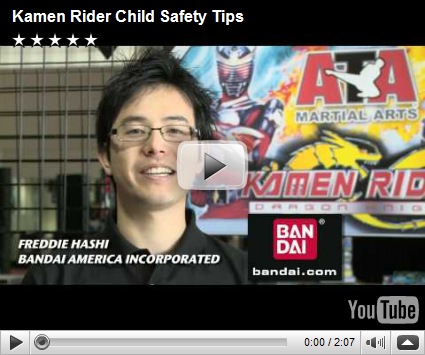