I started skateboarding when I was a bit older than Chip. It was sort of the dawn of skateboarding…For the Boston area. Surfer Guy grew up on the beach in LA which was the epicenter of skateboarding. It think it has been officially driven into his DNA. In fact, where we live, I see skateboarding legends all over. Just yesterday we were at a surf/skate/board shop and skateboarding legend, Kevin “The Worm” Anderson was there. Surfer Guy knows him from when he got his first skateboard and introduced him to Chip. There is a short film, Skaterdater, that was shot around our neck of the woods and won at Cannes. Several of the kids in it (who are now older than I am as it was shot in 1965) still live around here. I recently attended a screening and met one 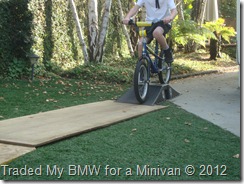 of the “kids”. So, it’s only natural that Chip and Lulu have already started skateboarding. I’ve been quite happy with them staying on straight flat surfaces…Mostly the walkway in our backyard. But I also realized that was getting a little boring when they started pulling planks out of the garage and making their own ramps. I had been thinking of buying them some sort of a skate ramp when I was contacted by Shaun White Supply Co. (I’m pretty sure most people have heard of Shaun, aka The Flying Tomato.) They wanted to know if I’d be interested in reviewing any of their products. What great timing, I thought! They kindly sent me the Shaun White Table Top Ramp, msrp $49.99.
First thing to know is that it comes in a box with three pieces. The pieces are easy to assemble and have screws/wingnuts that fasten on the underside. I was somewhat surprised that the box contained no 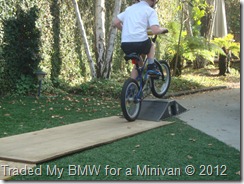 paperwork/instructions/warranty information. I didn’t need instructions—it’s really self explanatory. Subsequent conversation with the company has confirmed that there is no paperwork in the box. Their customer service is quite responsive so if you need to contact them, they offer good product support. The second thing to know is that the ramp isn’t that big. See the videos for reference. I would say it is good for up to about 8 years of age. This is the size ramp I wanted and it is very portable, I have brought it to the park. I think that some people might assume it is bigger than it is. The material feels sturdy and is described as being “high impact”. It also has a textured surface to aid with traction. The base doesn’t slip, but I’ve only used it on concrete and grass, nothing super smooth. The ramps can be used alone and have a decent 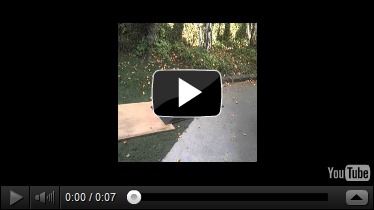 radius for doing what I would describe as “kiddie jumps”. My kids really like it and also use their bikes on it. Lulu just got her training wheels off and loves doing her first “stunt” moves on the table top. All in all, it is a good little kid/beginner ramp and tabletop. I’m looking forward to my kids trying out the ramp with the latest retro-skateboarding trend—small skateboards. These are the skateboards that are like the ones I learned on. Shaun White makes the
Retro Dart, msrp $49.99 which just debuted on Black Friday. 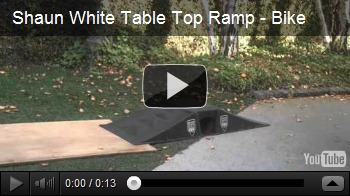 Disclosure: I received one Shaun White Supply Co Table Top ramp for review purposes. All content and opinions are my own.
Posted by Elizabeth at 1:08 PM