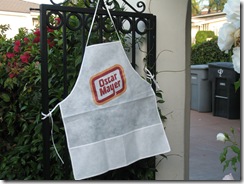 are really an umbrella term that includes "weiners" and "franks" under it. There are so many varieties, just go pick your favorite to put in your pun bun here. We had a successful neighborhood cookout, fed the men and women who serve us so bravely and enjoyed a glorious summer evening. All American and all good.
Posted by Elizabeth at 10:57 PM

Bun underage is worse than bun overage. This too-high ratio of bread to meat is worse, IMO.

I too love spicy brown mustard and onions on my dawgs. Ever tried mayo? Will get chili when we are out, but at home it's classic all the way! G has taught me sliced pickles are very good...he will love Chi-town.

Dear Anon,
Thanks for stopping by.

Regarding your first comment, I think I need a diagram.

Regarding your second comment...The event was over 2 hrs start to finish. I provided ONE pic of the event. If you must know, those cops in the pic are the patrol officers who came after the meeting started and grabbed a bite and stood near the food. The vine covered wall behind them encloses the courtyard where the food was set up. Just through the gate (by umbrella) tables and chairs were set up and the neighbors were sitting out there and speaking with the Community Liaison Police Officers. Once the cops in the pic finished their QUICK bite, they stepped through the gate and were introduced and gave a quick briefing and answered some questions. Plenty of mingling ensued. You have keen observation skills even though you made an assumption. Again, appreciate your taking the time.

K, funny that G likes the sliced pickles. My kids too. Maybe G can go to Northwestern? ;)

Love the puns... I can totally see you as captain of the Neighborhood Watch! So cool to have an Oscar Meyer party... I love hot dogs.