I’ve been intrigued by the FJ Cruiser ever since they arrived on the roads about four years ago.  My first car, meaning the first car I actually bought on my own, was a Jeep Wrangler.  The second car I bought after that was another Jeep Wrangler, then I bought my BMW.  You know the rest.  I like the up-high-military-tough-utility-vibe you get from the Wrangler and I also was getting that from the FJ Cruiser.  So, when Toyota was kind enough to give me the opportunity to test drive an FJ Cruiser for a week recently, I was thrilled to have the opportunity.  The FJ I received was Army Green in color, which was beyond awesome to Chip.  He kept calling it the “Army Guy Car”.  I was able to install both kid’s convertible car seats in the back seat fairly easily.  There is not a huge amount of room to maneuver in the back seat but it was sufficient.  I think that also, as I became more familiar with the car it would become easier.  There definitely was not room for a third car seat or another person in between the two kids.  The rear cargo area, 27.9 cubic ft. was larger than a typical sedan trunk and more than what I needed for my daily use that week.  With the rear seat folded down, you get even more space.  Visibility is very good because you are up high.  Windows are overall, smaller than the typical car, with a wide yet vertically narrow windshield, although not distractingly so.  Everything from the controls to the cup holders to the rubber floor mats feels very utilitarian.  The front seats are comfortable and upon climbing behind the wheel, I felt like I was in a really, really tough, solid vehicle.  Seating materials are not only water-repellant, but also provide excellent ventilation. Seats are covered with a fabric backed by a special breathable resin coating to enhance the material's ability to shed liquids, making it easy to wipe down the seats. Even the stitched seams of the seat covers are treated with sealant to prevent liquids from penetrating. The FJ Cruiser's floor surfaces are covered with an easy-to-clean rubber-type material.  When you look inside the FJ, you kind of get the feeling you could hose the whole thing down.  [And if you’ve ever had a kid throw up inside your car, that could be a nice option]. 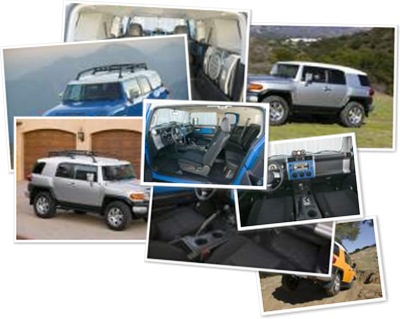 The FJ handled really well on the city streets and the highway.  The turning radium was excellent which I find typical of Toyotas.  One thing that I absolutely loved about my Wrangler was being up high and the visibility that gave me.  The FJ definitely delivers on that.  I definitely had some challenges when going in reverse in the FJ.  Now, to be fair, in my minivan I have both a back up camera and sonar, so I’m spoiled.  However, being up high and having the small rear window did require me to be extra vigilant going in reverse.  Rear passenger visibility is not ideal with the smallish windows.  My kids were happy and and liked to wave to the guys in the trucks who were now at their height.  However, I don’t know how long that would have lasted and keep in mind they are toddlers.  The height to climb into the FJ was fine for both myself and the kids because of the body side steps.  I did have to make sure I helped them getting out, something I don’t worry about in my lower minivan.  The FJ is powered by a 4.0-liter V6 engine that provides 258 horsepower.  I found the cabin to be fairly quiet and fairly well insulated from road noise while on a forty minute highway drive.  The FJ is offered in both 4x4 and 4x2 models, I drove a 4x2 which only comes with a 5-speed automatic transmission.  EPA Estimated Fuel Economy of the 4x2 is 17 mpg (city) 22 mpg (highway).

There are some unique things I’d like to point out.  Although the FJ Cruiser looks like a 2-door it really is a 4-door: The FJ uses side access doors that open 90 degrees in clamshell fashion for easy rear-seat ingress and egress. Additionally, a swing-up glass hatch is incorporated into the side-hinged rear door. The glass hatch opens independently of the rear door and helps accommodate longer items.  Finally, the windshield wiper uses three arms to provide nearly complete coverage of the wide windshield.

In summary, the Toyota FJ Cruiser is a cool car with a solid Toyota Land Cruiser history and lore behind it.  Do I like the car?  Yes.  Here is who I might recommend this car for: a single person in their 20’s-30’s who wants a sporty SUV but usually doesn’t need to have someone in the back seat.  A family that lives in a snowy climate that already has two cars and would like a 4x4 as a third car.  For me, with the two toddlers, I just can’t give up the minivan yet, but if I had a third garage, I would not be opposed to having an FJ Cruiser in it.  Chip, for his part, would like the “Army Guy Car” returned as soon as possible and is greatly dismayed that I only had it for one short week!

Toyota Motor Sales, USA, Inc. provided me with a 2010 FJ Cruiser to test drive for one week.  I received no compensation from Toyota in relation to this post.