The Private Chefs Of Beverly Hills Met With Me Privately

Without planning and with the LA traffic gods singing, I sailed the minivan into the valet at The Thompson Hotel in Beverly Hills at exactly 7:25 pm this past Tuesday.  Which allowed me to make to take a quick couple of steps across the small boutique hotel’s lobby, smile and nod at the front desk staff and elevator it up to the roofdeck.  The manager checked my name off the guest list and there I was walking into the event…As literally the first guest to arrive to a Food Network Party for The Private Chefs of Beverly Hills.  The beautiful pool shimmered before me, the hipster bartender and staff were preparing the hip cocktails and all six of the Private Chefs were putting the final touches on their tasty offerings.  So what else was there for me to do? I started talking to the chefs!  First up, Brooke Peterson, who is expecting a baby girl in a few weeks.  We found out that in addition to sharing the same last name, we both love to have theme parties.  I next stepped over to Irishman Stuart O’Keeffe who made the most rocking Guinness-marinated-short-rib-sliders! I swear vegetarians were converted.  Still on that side of the swimming pool, I finished up with Manouschka Guerrier who is heavily influenced by her Haitian roots and served me a plaintain cup with oxtail and a champagne chocolate cupcake with pink frosting that was sooo pretty.  I hit the bar for a glass of cab and flipped pool sides.  I wanted to sample Brian Hill’s fare, but he wasn’t quite ready.  He did assure me it would be fabulous.  I told him I’d loop back.  Next I hopped to Sasha Perl-Raver who was a hoot and had some good eatin’ at her table.  Sasha was working a lemon theme with lemon squares to-die-for.  Crab bites and some other yummy bites.  All soooo good!  More guests were coming, so I wasn’t feeling so ALONE and ODD, which was good.  I also now had friends at the party which was quite nice.  So then I moved over to Jesse Brune’s table.  Jesse was working a red theme with watermelon and tuna sashimi, strawberry pepper soup and a red cocktail.  The watermelon and tuna was better than I thought it would be.  At last I was able to connect with Brian Hill and sample his salmon with mango salsa.  I told him going in that I had developed a salmon aversion with my first pregnancy and needed just a small bite to see how I could do.  He told me, “I worked for Mary J. Blige! I can do whatever you want!”  I wasn’t sure what that meant but I was like, “Ok!”  Brian was so awesome.  I asked him what the most memorable part of the series was.  He told me that the “glamping” (glamour+camping=glamping) segment in tonight’s premiere episode was quite the challenge.  After that he said, “I knew I could do anything in life!” 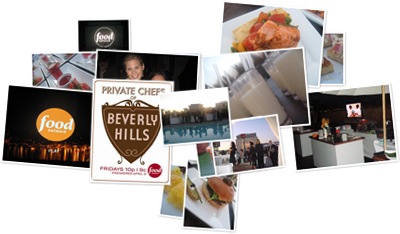 View Full Album
private chef placement agency. On-call 24/7, the chefs must cater to the whims of their over-the-top and eccentric clientele in Los Angeles’ most posh neighborhood. Find out more at http://www.foodnetwork.com/privatechefs . I do believe I learned a new term that that night: Docu-Soap.  So, my friends and I settled into a poolside cabana as all the tv’s set up around the pool and in the cabanas began to show the premiere episode “In The Dog House”.  The episode shows the six chefs on three different assignments, each of them very, very funny.  We were laughing out loud.  Can I just take a moment to say I was sitting in a cabana at The Thompson Hotel in Beverly Hills, with The Private Chefs themselves all nearby, while I watched their show.  Kind of funny on its own.  The show is laugh out loud funny.  I will watch this show.  I am telling people to watch this show.  I am telling you to watch this show.  I met the chefs.  I like the chefs.  I like their food, them and their show.  Premieres tonight on The Food Network.
Posted by Elizabeth at 5:42 PM

So. Much. Fun. You summed it up so much better than I could have ever done it!

I absolutely cracked up laughing at the first episode and that recipe for Guiness Short Rib Sliders needs to be published ASAP :)

Thanks for the recap!