We are at the tail end of National CPR Week. But that doesn’t mean you shouldn’t learn Cardio Pulmonary Resuscitation AKA CPR. It could save a life. My mother the nurse was skiing in Vermont last year and saw a skier down and as she was going past she sensed something was wrong. She stopped below and yelled to another skier above to check on the downed skier. He needed CPR, the guy started on him, my mother fought her way up the hill, calling the ski patrol and joined in the chest compressions. Sadly, my mother later found out the man died, but both my mother and that other random skier KNEW CPR. Do you?

Did you know that nearly 300,000 out-of-hospital sudden cardiac arrests occur annually, and four out of five cardiac arrests happen at home? That means the life you save with CPR is most likely to be someone you know and really care about. GoRedForWomen.org which is part of The American Heart Association is asking women (and men) everywhere to watch the Official Hands-Only CPR instructional video to learn how to save a life. I have also inserted the video here: 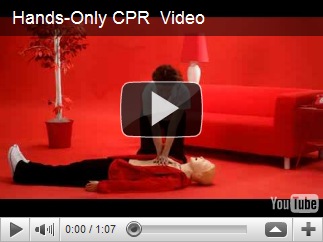 In closing I would like to encourage everyone, men and women, to familiarize yourself with the signs of a heart attack. The symptoms for women can vary from those of men. It is therefore extremely important to know what you can do to keep yourself healthy, reduce your risk and of course recognize if you are having a cardiac episode. As you look through the site you will realize that you are never too young to have a heart attack. Go learn your hands only CPR! Much love and much health to all my readers, I heart you!!!