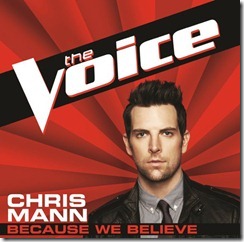 Sometimes you meet someone and you are convinced they are going places. It’s not like you can actually articulate it…Talent, charisma, work ethic, passion, determination, training…That they are nice? I don’t know. It was a small gathering in a home in LA about 3 years ago where several of us LA bloggers were in attendance. However, we were linked up with events all over the country via the web.  There was a really nice guy named Chris Mann who was there to perform live to be broadcast to all the events. The first thing that I got off of him was that he was really a musician. He played the piano while he performed as well as belted out tunes standing behind a microphone. I also recall his mom was there. We spoke a bit and I thought it was really cool that his mom was out from Kansas (where Chris grew up) and was running around town with Chris for a few days. My takeaway from the first meeting: Chris Mann was one to watch.

Since I live on the internet (yes, my bed is on the internet), I quickly got hooked up with Chris on Twitter and Facebook and ChrisMannMusic.com. I would tweet at him and he would always tweet back. A few months after the initial meeting in LA, I found out he was performing in Chicago at some events I would be attending. Again, Chris enforced my opinion that he had real talent. The other thing it enforced is that this guy shows up. I like people who show up. I pride myself in showing up. Success comes from showing up.  About a month after Chicago, I attended a party to support women entrepreneurs in Africa. Yeah, you figured it out. Chris was there. The hostess, another LA blogger friend of mine, had asked him to come. He brought in his own equipment, keyboards, etc and got to it. It was official. I was a Mann Fan. I kept tabs on Chris. I love his cover of George Michael’s “I Want Your Sex”. I love George Michael. I loved that Chris made that song his own. Watch the video here.

New York City. August 2010. It was after midnight. I was heading back to the hotel from my friend Bobby Flay’s restaurant with 3 good friends. As we walked into a side entrance of the New York Hilton, there’s Chris. Big hug! He’d been performing some shows in NYC. I introduce him to my friends and they ask about his music. I say, “He reminds me of Robin Thicke”. Chris lights up and thanks me for the comparison. Tells me of an upcoming show in LA. I assure him I’ll be there. Exhausted, I hug him bye. I glance back and his blue eyes are sparkling as he shows no signs of fatigue and continues to speak with more fans. Showing up and going places. Uh-huh. Next followed a blur of stuff Chris had cooking like being on Glee and working with Babyface. You should read his bio to see all he’s done…It’s impressive.

Then the tweet came: Chris tweeted he would be on NBC’s The Voice, premiering after this year’s Super Bowl. The time slot after the Super Bowl is coveted. NBC was positioning The Voice and Chris was on that show. Oh. Yeah. In that opening episode, Chris owned the stage. His opera training in full effect. To see the looks on the judges faces, the grinning. I knew he was in. If you missed it, here it is: 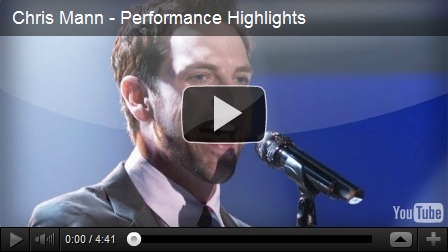 Chris Mann on The Voice, NBC

Tonight (in the show’s regular time slot, Mondays 8/7 Central) was the elimination round. Half of the contestants would be sent home. Chris was paired with someone who challenged him to change it up. I suddenly had a flash of him on Broadway. Yes, I am always right. But, before Broadway, the rest of this season’s The Voice and my friend, Chris Mann.
Posted by Elizabeth at 11:47 PM

Email ThisBlogThis!Share to TwitterShare to FacebookShare to Pinterest
Labels: Hollywood

thank you for this! you're so awesome! see you sooooon.