As described in my Shamrock Shakes post from March 2009, I have had a decades long love affair with the Shamrock Shake. This year, for the first time, Shamrock Shakes are nationwide! They look different from the ones of my youth….Fancier and all McCafe’d out. But the heart and soul of this genius invention remains. I’m quite excited that I’m the recipient of 10 free Shamrock Shake coupons to give out. I handed one to Chip’s

Kindergarten teacher yesterday and her eyes lit up. “I’ve never had one!” she exclaimed. “I’m going right after to school to get one!” I gasped and replied, “Never had one? I won a St. Patrick’s Day contest in second grade for one…You must start holding the contest!”

Please follow me down memory lane and the mintcool goodness that is the McDonald’s Shamrock Shake: 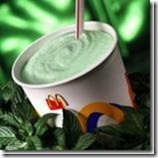 When I was in second grade, our class had a contest for St. Patrick's Day.  The student who wore the most green items would win lunch at McDonald's with the teacher and a Shamrock Shake.  I vividly recall planning my ensemble for days.  I carefully collected anything and everything that could be worn by me and was green.  I even secured green underwear.  I won--handily.  So off we went to McDonald's: Mrs. Mayo (my teacher), Cathy (the girl who won from the class next door) and her teacher.  I had my first Shamrock Shake, the year was 1977.  Jimmy Carter was the new President.  Today, 32 years later, I had my most recent Shamrock Shake.  Barack Obama is the new President. 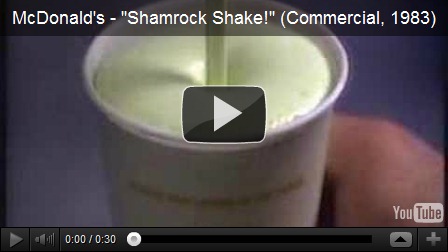 I was able to find solace and comfort in a childhood favorite, the minty, refreshing, creamy Shamrock Shake.  Back in '77 there was only one size shake and there was a character named Grimace who drank them.  Now McDonald's shakes come in 3 sizes, each one bigger than the '77 version and most Americans are as big as Grimace.  It used to be you could count on two things in March, the Shamrock Shake and the NCAA Tournament.  The former is no longer a given.  They are not available everywhere and are not available every year.  In 2007, they were not to be found anywhere in the Los Angeles basin.  Frustratingly.   I even recall pulling up to drive thrus and asking "Do you have Shamrock Shakes?"  The person would always respond "Yes."  Excited, I would pull up to the window only to meet someone who had only a passing command of English and was probably experiencing their first St. Patrick's Day in this country.  I would repeat "Shamrock Shake."  And they would respond, "Wha' kind o' eeee-shake, you want?"  I would ask them to get their manager, who luckily had been in the country at least a couple of years.  They would come to the window and explain that they didn't have them this year.

I'm always amazed when I meet people, fellow Americans, contemporaries, if you will, who do not know what a Shamrock Shake is.  I cannot be friends with them.  I. Just. Can't.  I don't care if you think they are disgusting.  Just that you KNOW of them.  That you are part of my tribe.  There is even a website dedicated to the Shamrock Shake.  They are only available for a limited time.  And oh-so-delicious.
Posted by Elizabeth at 12:09 PM