It’s a peculiarity of Los Angeles that unless you work or live there, you can easily go months without ever going downtown.  I recently had the opportunity to go to the LA Autoshow at The LA Convention Center and will be going to Disney on Ice at the Staples Center next week.  I really like the downtown area and all they are doing to revitalize it and make it a family destination.  So, let’s start with the Autoshow.  What a fun event for someone like me who is all about cars.  We were invited for a special early-beat-the-crowds entrance which made parking a breeze.  Next we were given an overview of the convention floor, and by overview, I really mean OVER-view.  We were in a room a couple of stories above the floor looking 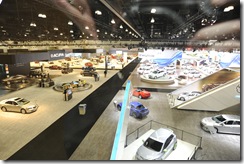 down.  Wide array of cars as far as the eye could see.  I couldn’t wait to get down and talk horsepower with the “spokesmodels”.  But, I had the family with me so we made the Kid’s Fun Zone our first stop.  In this area, kids had the run of two bounce houses, an inflatable obstacle course and, Chip’s favorite part, a driving course with kid sized cars!  The Kid’s Fun Zone also offered other activities, but we never made it to them because Chip and Lulu were all about the bouncing and the cars.  After we bribed the kids away from the “zone”, we headed to the main convention area.  Every single manufacturer and every brand were in attendance.  I was really interested in checking out the 2011 Buick Regal as I had attended the unveiling in Hollywood last month.  I had minivan envy as I chatted up a “spokesmodel” about the 2011 Toyota Sienna--love the dual moonroofs.  I walked down memory lane as I strolled amongst the BMWs….Gently whispering, “I’ll be back.”  Speaking of which, while I was in the elevator with the kids, my mom and Surfer Guy were taking the escalator and who did they walk right past???? The Guvernator himself!  My mom said, “Hello, Mr. Governor.”  And he totally ignored her.  Not. Cool.  Let’s hope he either didn’t hear her or was focused on bringing more car manufacturing jobs to California?  ‘Kay? 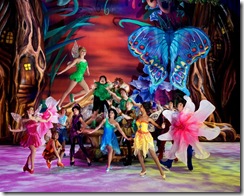 Next stop in downtown LA, and right across from the LA Convention Center, is Disney on Ice at The Staples Center!  I’ll be attending with my family next week and we are really looking forward to it.  Especially something that they sure didn’t have when I was a kid: The Disney Princess Pre-show.  One hour prior to each performance families will be able to view an exclusive collection of enchanting ball gowns and mementos from the Disney Princess stories.  This is a bonus experience that is included with your show ticket and includes a special appearance

by a Disney Princess.  Once the show gets going, there will all kinds of action by Disney characters such as stunts by Lightning McQueen, “Circle of Life” with the Lion King and Tinker Bell and her fairy friends making their world premiere on ice.  Many of my loyal readers know how much I love Disney and that Tinkerbell is my favorite character!  The info I’ve received promises skating, special effects and animatronics.  This sure isn’t the Disney on Ice of my childhood.

There are four Southland venues with shows running from December 17-January 10.  Ticket prices range from $16-$65 with Opening Night seating at each venue set at $12.  Disney on Ice has offered a special promotion for my readers: enter coupon code MOM at checkout and receive 4 tickets for $44 (weekday matinee shows) or $4 off single weekend tickets.  You can order tickets online at DisneyOnIce.com or Ticketmaster.com.
Posted by Elizabeth at 2:13 PM

Are you going Opening Night? If so, maybe I'll see you there!

So much fun! I just enjoyed strolling through the fun events and exciting adventures on your blog! I would have wanted to hide the trial cars in my garage too! :)