The day after the premiere of World of Color, I returned to Disneyland for a media presentation of “What’s next?”  Well, there sure is a lot to tell.  Once again this year, The Summer Pass is being offered to Southern California residents.  Valid from June 11-August 29, 2010, for $108 your receive a 3-day park ticket which allows you to visit either park on three separate days within a 45 day period.  That works out to $36 per day and is a really great deal!  Summer Nightastic kicked off June 11 and is a dynamic lineup of entertainment including Fantasmic! with it’s new dragon, fireworks featuring Dumbo and Tinkerbell flying over Sleeping Beauty’s Castle, Tommorowland Terrace TLT Dance Club and Pixie Hollow Enchantment all taking place after dark at Disneyland Park this summer and runs through August 29.  New attractions to look forward to are: Star Tours in 3-D at Disneyland and Ariel’s Undersea Adventure at California Adventure, both coming in 2011.  The upcoming attraction generating the biggest buzz is Cars Land, the 12-acre expansion slated to open in 2012 in California Adventure.  We saw a presentation showing the three new rides going into Cars Land, the main one being Radiator Springs Racers.  Somehow, 2012 seems so far away!
Not everything new is happening exactly in The Disneyland Resort.  The Disney Cruise line is coming to the West Coast in early 2011 with its cruise ship “Wonder”.  For the first time, itineraries will include Alaska cruises from Vancouver.  Before and after the summer Alaska cruises, Mexican Riviera itineraries will be offered out of The Port of Los Angeles.  We were also informed of a really great promotion: From Jan. 23 to March 20, 2011, Disney Cruise Line will make it easier to experience the West Coast cruise magic with a special “Kids Free” offer on seven-night cruises to the Mexican Riviera.  Guests age 17 and younger can sail free aboard the Disney Wonder when accompanied by two full-fare paying guests occupying the same stateroom on seven-night voyages (government taxes and fees excluded).  For more information visit DisneyCruise.com/KidsFree 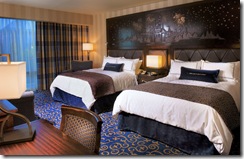 The Disneyland Hotel is undergoing renovations to actually retro-renovate it to be more in the style it was originally designed to be.  I saw some plans and photographs of rooms and suites that are already completed and it looks really cool.  They are also making enhancements to the pool and water play area including a monorail themed waterslide with the original Disneyland sign atop that I know Chip and Lulu would love!  Speaking of staying at the resort, there are several packages this summer.  The 5 days for 3 gets you a 5 day park hopper ticket and 5 days in a resort hotel for the price of 3.  There are also discounts of up to 40% on rooms in each of the 3 resort hotels this summer.
The news I’m really excited about is Aulani, the Disney resort opening in Hawaii Fall 2011.  Located on Oahu, you can find more info at DisneyAulani.com  and I hear you will be able to make reservations well in advance of opening so check in at the website for updates.  Have fun and remember to visit Disneyland.com for further info!

If you have extra time to spend exploring the Anaheim area, visit this page on Uptake.com for some great info and reviews.
Posted by Elizabeth at 10:46 PM