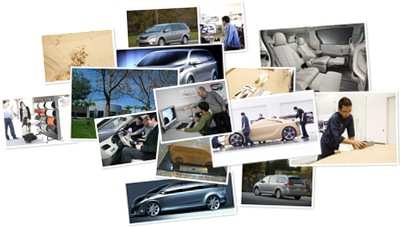 I recently won the Toyota equivalent of Willy Wonka’s golden ticket—an invitation by Toyota to tour Calty Design Research as part of a blogger group, Toyota’s North American design operation located in Newport Beach, California.  Calty is so exclusive that even Toyota employees would love the opportunity to visit!  It was really interesting to learn about Calty and that part of the reason the location was chosen back in the early 1970’s was to enable the designers to get inspiration from the California lifestyle.  As we entered the building I glanced over my shoulder for corporate spies amongst the swaying palms, the coast seemed clear.  The first few rooms and hallways were a really cool retrospective of car styles, colors, textures and interiors from the past fifty years.  Many of us were able to identify colors, carpets and seats from our childhoods and got a good perspective of how styles have evolved.  We next moved on to a presentation of the car design process.  It easily takes a couple of years to design a car, even more.  The fastest might be a little over a year.  The Toyota FJ Cruiser is an example of a car that was fast-tracked because it received such positive response at car shows.

The next part of the tour was what really fascinated me and caused us all to say, “who knew?”  They actually do clay modeling of every single car that is made.  Full size clay modeling.  It was explained that it is the only way to get the actual, complete design understanding of the car.  As “low tech” as clay modeling is, there really is no substitute.  Then it was our turn.  Each of us bloggers was presented our own basic Sienna shaped clay model (see video) and assigned the task to design our own Sienna.  Yikes!  I’m so not crafty.  Luckily the Toyota sculptors took a break from the REAL car they were working on to step over and help us out with pointers and loan us some of their tools.  A couple of them even took pity on my poor minivan and even worked a couple of maneuvers on my model to get me started.  I think I had better stick to blogging.  But, it was still really fun, I even designed a snowboard rack on the back of my Sienna.  Because I could.  We were presented our Sienna’s encased with a plaque at the end of the event and I have mine proudly displayed in my living room.  I love my minivan!

We then washed the clay off our hands and headed outside, but still within the walls of Calty, to meet with some of the Sienna design team: Chief Designer Ian Cartabiano (shown in video) who does vehicle design, Chief Designer Wendy Lee who is responsible for color design and Chief Designer Benjamin Jimenez who does interior design.  They had a lot of information to share with us with pictures and diagrams as well as samples.  There were also two Siennas for us to peruse and ask questions about.  It was amazing to be at Calty and see how cars go from concept to design to reality.  One question that came up quite a bit from my last post was the run flat tires.  Since I had all kinds of Toyota employees with technical knowledge all around me I thought I’d ask for some input on the 2011 Sienna and the run flat tires.  I got to speaking with Katsuhiko Koganei, Communication Coordinator for Toyota who told me that he has run flat tires on his 2011 Sienna and that he finds the ride to be “quieter, the cabin is quieter and a less harsh ride” than the previous generation run flat tires.

Then I got my chance to try the run flat tires myself!  We bloggers broke up into teams and set off on a scavenger hunt for charity, each team in our own 2011 Sienna.  I maneuvered quickly at the sign up sheet and scored one of the Siennas with the run flat tires.  Off we went to purchase supplies for an Art Therapy program with Amex gift card we were provided.  Since I already have a Sienna I was able to hit the ground running on the navigation system on top of the fact that I’m a So. Cal local and the rest of my team was from out of the area.  I loved driving the Sienna again and again I had minivan envy.  The run flat tires were not at all noticeable to me and everyone else agreed that they didn’t know they were anything other than regular tires.  We spun around Orange County picking up our supplies and took the Sienna through city streets, on the highway and along some twisty Pacific Coast roads enjoying a great little tour of the area.  We finished up back at our hotel where we unloaded our Sienna, which sure held a lot of stuff and got ready for our closing dinner.  That night we presented our charities with everything we bought and had a nice dinner with many of the Toyota team members we had met with during the day.  It was great to be able to follow up with questions and be able to exchange cards and make more connections with some of the people I hadn’t been able to speak with.  What an amazing experience and what appreciation I have now that I understand a little bit more about what exactly went into designing the 2011 Toyota Sienna.