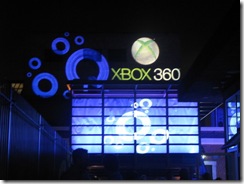 E3, the annual Electronic Entertainment Expo is kicking off tomorrow here in LA and I’ll be attending.  I’m really looking
forward to it!  Many of you know that I’m a big video game fan.  A few weeks ago I got a sneak peek at and chance to play XBox 360’s “Project Natal” which was the working name for Kinect the new add on for the XBox 360 where you are the controller.  The name Kinect was announced last night at a big XBox 360 Cirque du Soleil performance at USC’s Galen Center in downtown Los Angeles.  The performance, although involving Cirque du Soleil, actually heavily showed just how Kinect works: literally YOUR BODY is the controller—that’s it.  The technology picks up points on your body and then you are 1) steering a car 2) running a race 3) bowling 4) dancing 5) doing yoga and the list goes on.  It was really trippy to see the Cirque interpretation of a sort of rainforest meets 21st century video-game technology performance.  I really can’t explain it any other way.  Everyone in the audience wore these white ponchos with shoulder pads that glowed with different colors at different times in the show.  There were regular families up in a box on the side of the Galen Center playing Kinect while Cirque performers dressed as rainforest creatures reacted to their moves.  Periodically a woman would walk across the ceiling (yes, upside down) of the living room the family was playing in.  There was also a fake elephant that at first I wasn’t sure was fake, a family sitting in a couch suspended from the ceiling of the center and people dancing in boxes up high on the walls.  Only Cirque, only XBox and of course, totally out of the box.  That’s what I say.

At the after-party last night, held in the penthouse at a hipper-than-me loft in downtown LA, I got the chance to play Kinect which now has a few different games and experiences from the sneak peek I had.  I went up to the roofdeck and played some of the games up there with the LA skyscrapers all around me.  It was really awesome to see the XBox 360 logo projected onto the building next door.  Then across the block they were actually projecting Kinect games on the wall of the building (see my video).  Wow and E3 hadn’t even started yet.  What a scene to get my game on!  One really fun one is Kinectimals which lets you literally touch and interact with cute animals right on the screen.  The animals mirror your actions and respond to your touch.  I also tried Joy Ride which I show in the video just to the right—air steering wheel!  There are 5 games currently available in the demo pre-release version of Kinect: Sports, Kinectimals, Star Wars (which blew me away in the Cirque show! Hand to hand combat with Darth Vader!), Dance and Adventure.  Within each of those games, there are various activities.  Kinect will also allow you to access Netflix, Facebook and all kinds of online services with a wave of your hand.  It is definitely a whole new way to play video games, with absolutely no technology touching your body.  You will need to have an XBox 360 in order to play Kinect—it’s an add on.  It will be available for holiday 2010, most likely in November and the price has not yet been announced.

Disclosure: I was invited to the sneak peek party, the Cirque du Soleil Kinect launch event, the Kinect for XBox 360 Loft Party and given a FlipCam that I used to shoot this video--all courtesy of XBox. 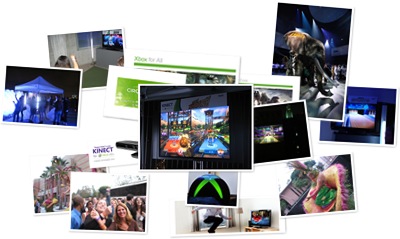