The dot-com era image that totally nails it in my Gen-X brain, to this day, is the hipster riding a Razor Scooter through the office.

The funny thing is that although most of those dot-coms crashed and burned, The Razor Scooter has continued on a smooth glide into its 10th anniversary.  My family and I were super lucky to be invited to a Razor Playdate recently where we got to try out a number of Razor products.  In fact, Razor now has 50 ride-on products with something for everyone.  I always believe in starting with the original concept, thus the Limited Edition 10th Anniversary Model is the Razor Scooter to me.  The aluminum frame and urethane wheels give such a smooth glide and the adjustable height handlebars and 200 lb weight capacity make it an accessible ride.  The scooter is only 6 lbs and is easy to fold and carry.  Recommended for ages 5+ with a MSRP of $99.99, although I have seen it at major retailers with a lower price tag.

For the littlest ones, like Lulu, I recommend a “training scooter”.  The Razor Lil’ Kick scooter has three wheels which allow

s for the preschool crowd to work on their confidence and coordination without having to simultaneously focus on balance.  The Lil’ Kick also has a wider deck that lets the rider have both feet squarely on board.  Extra-large wheels and a handle-bar pad are nice added touches for a child’s first Razor Scooter.  Recommended for ages 3+ with a MSRP of $39.99. 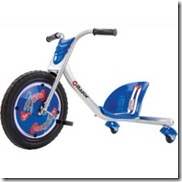 Now onto the RipRider 360, which is just so awesome.  I wish I had this when I was a kid.  It’s the 2010 version of a 1970’s Big Wheel!  The rear dual-inclined caster wheels allow for total free-wheeling.  You can ride along and then drift and spin out effortlessly.  At the Razor Playdate, I watched a 12 year old boy having a blast on it and he gave me two thumbs up when I asked him if he would recommend it to his friends.  The RipRider 360 has won a bunch of awards over the past couple of years.  Being a mom who sees a lot of toys and is seeing toys from her own childhood come back, I was really wowed by the RipRider 360.  Finally, something that caused this perhaps slightly jaded mom to say, “HEY!  What’s that?!”  Recommended for ages 5+ with a MSRP of $129.99.  Many of my readers know how important the topic of child safety is to me.  At the Razor Playdate we were invited to bring our own helmets and safety gear if we had it and they also supplied it to anyone who wanted to try any of the products and didn’t have their own.  I strongly urge anyone who gets any of these amazing Razor products for the children in their lives also make sure they have the necessary safety equipment to go along with it.  Razor shares tips and info on their commitment to safety on their site.

Disclosure: My family and I were invited by Razor to attend their Playdate Event where we were given the Limited Edition 10th Anniversary Scooter.  Razor gave me the Lil’ Kick Scooter and RipRider 360 for the purpose of this review.

Posted by Elizabeth at 6:32 PM