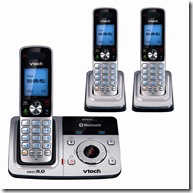 The VTech DS6321-3 is an expandable, three handset, cordless phone system with a digital answering machine.  The feature that takes this cordless phone to the next level is that it has Cellular Connection through BLUETOOTH technology.  This means you can synch your cell to your VTech system and never miss a call.  That has become kind of a big deal to me lately.  I get a call on my cell and it’s sitting in my purse in the other room or charging somewhere—where I can’t hear it.  The beauty of this system is that your cell will ring through your cordless phone and you can use the closest handset to answer.  Another interesting feature is that with the move away from landlines, you can still have this system in your house and use it only for your cell phone.  Like a whole house BLUETOOTH set up.  This comes with 3 handsets (each with its own charging base) but is expandable up to 12.

The DS6321-3  is the first cordless phone system capable of downloading cellular phonebook directory entries using the BLUETOOTH technology, making it really easy to just pick up the phone and use your cell line.  Up to four BLUETOOTH devices (cell phones, smartphones, headsets) can be registered on the DS6321-3, and two cellular phones can be connected to the DS6321-3 at one time.  Operating as a virtual two-line system, the DS6321-3 also allows users to be on a landline call on one handset, while another handset can be used simultaneously for a cellular call.  You can set the ringtones on the handsets so you know if it’s a cell call or a landline call coming in.  For hands-free landline conversations, users can make and receive traditional landline calls on the DS6321-3 while using a BLUETOOTH headset, or take advantage of the handset speakerphones.  I don’t have a BLUETOOTH headset since I have it wired into my car, so I use the handset speakerphone, mainly when I’m waiting on hold.

This brings me to my nit-picky wish list for this system: I wish it had a regular headset jack so that I could have a hands-free conversation (as I mentioned, I don’t have a BLUETOOTH headset), I wish it had a belt clip which is something I actually used on my last cordless system and as a busy mom, I can frequently multi-task with a phone clipped on and a headset.  These would seem to be really basic things that I would personally appreciate having.  Another negative I’ve noticed is that the “delete” function on the answering system is very unforgiving.  When you are done listening to a message, you literally run the risk of deleting the next message if you hit the delete button.  There is no “margin” between messages.  I’ve found it’s safer to run through the messages once and THEN go back and delete.  In all my answering machines, over the years, I’ve never had this “phobia of deleting the next message.”  So, I’ve got that workaround.  Overall, I’ve been happy with this system and will continue to use it.  It is comfortable to hold, the battery life has been mostly sufficient, however, we do tend to keep them on the chargers when not in use.  Coincidentally, both my mother and my sister who live in different parts of the country bought this exact same system independent of knowing that I had it too.  They are both happy with it.  MSRP is $99.95, but I have seen it at major retailers and wholesale clubs for less.

Disclosure: I was provided with one VTech DS6321-3 for review purposes.