Ultimately, in this town, it’s who you know, not what, if you want to get your minivan onto a studio lot, primo parking and set access.  Hollywood connections, are the nature of my game.  That said, myself and several other awesome mom bloggers visited the set of the NBC sit-com, Community, a few days ago.  The basic premise of the show is that it’s a group of misfits who all attend Greendale Community College together.  We had a fabulous time hanging out on the set, watching some of the taping and meeting members of the cast.  While we kicked back on one of the sets they weren’t currently shooting on, Joel McHale, Ken Jeong, Alison Brie and John Oliver stopped by for a fun and fairly silly Q & A with us.  Because, hey, it’s a COMEDY, and these folks can’t just stop and be totally serious, right?  I had secretly hoped that Chevy Chase would be on set that day, because, he is such a legend.  My father was a huge fan.  Alas, he wasn’t taping that day.  We next headed over to an executive dining room on The Paramount Lot for lunch with Yvette Nicole Brown, who was just awesome.  She is so fun and upbeat and talked with us about a whole range of topics.

Community from Liz Peterson on Vimeo.

The big reason for our attendance was to learn about the “Very Special” Community airing tonight at 8/7c on NBC.  In the quick video I’ve added in here, you can watch some of the cast talking behind the scenes info about the episode.  It’s stop-action claymation like the classic Christmas shows from our childhood. 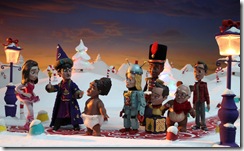 ABED'S UNCONTROLLABLE CHRISTMAS: THE MEANING OF CHRISTMAS IS LOST AND ABED’S INTENSE FIXATION ON CHRISTMAS CONCERNS THE GROUP —When Abed (Danny Pudi) wakes up in stop-motion animation, he takes it as a sign that he and the group must re-discover the meaning of Christmas. Meanwhile, Jeff (Joel McHale) and Britta (Gillian Jacobs) become growingly concerned about Abed's mental health and enlist the help of Professor Duncan (John Oliver). The group undergoes hypnosis to explore Abed's winter wonderland and soon unravel the truth behind Abed’s madness. Chevy Chase, Yvette Nicole Brown, Donald Glover, and Ken Jeong also star.  Review:  I was lucky to get a special early viewing of the episode and it is so awesome!  The stop-action animation is executed really well.  All the characters come together, although transformed into clay, to help Abed.  Everything is so true to the “regular” show.  The story line is really clever and fun.  It would be interesting to see if this becomes a cult holiday classic.  There will be a Community “Live Viewing Party” on Twitter hashtag #nbcCommunity tonight at 8pm EST/7 CST/5 pm PST and there will be cast members participating and giving out prizes.

Posted by Elizabeth at 2:03 AM

I love that show! I can't wait to watch it on my DVR this weekend.